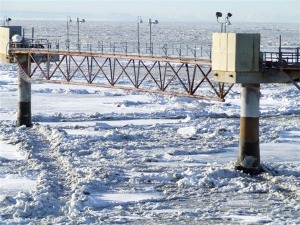 In the winter, Kathleen Cole’s job is like a scavenger hunt. But instead of searching for clues to uncovering hidden treasure, she searches for clues to uncovering Cook Inlet ice conditions. Cole is the National Weather Service sea ice program leader for Alaska, and ships rely on her to help them determine if they can safely pass through ice along their route or need to change course.

For this important task, Cole has remarkably little data to draw upon.

Cole receives images of Cook Inlet from satellites, but they can be more than six hours old by the time she receives them. The quality of the images she receives is sporadic and images taken when clouds or the long winter night obscure the inlet can’t be used at all.

Consequently, Cole is always looking for additional image sources. Sometimes she’ll call the U.S. Coast Guard to see if they will take a picture for her while passing over the inlet on the way to somewhere else. Or sometimes she’ll try to see what she can of the ice through cameras aimed at Mount Redoubt or the Homer Spit.

“We scrounge for data very well in this business,” she said. “That’s what I spend most of my days doing in the winter.”

This winter, however, Cole hopes to spend more time learning about Cook Inlet ice floes and less time scavenging for images after the Cook Inlet Regional Citizens Advisory Council installs four video cameras in and around the inlet to help her monitor ice. The video cameras are the first of up to 10 cameras CIRCAC hopes to install in the inlet. They will provide Cole with real-time images, which is particularly important in Cook Inlet, where extreme tides and strong winds are constantly shifting the ice. In the main body of the inlet, the tidal range can reach 25 feet and result in currents that move nearly six miles per hour. The inlet’s Turnagain Arm exhibits the United States’ biggest tidal range.

“Cook Inlet ice moves so much,” Cole said. “It can be up against the northern side of the Inlet in the morning and the southern side in the afternoon, either because of the tides or the winds, it moves.”

Ice forecasts are particularly important in Cook Inlet, which is a major year-round port. In evaluating Cook Inlet ice for a given area of the inlet, Cole tries to determine how much of the water’s surface the ice covers and how thick it is.
Each ship that enters the inlet is rated to handle a certain amount of ice, and if the ice en route is more than a ship can handle, the ship might have to change course. Even ships that can handle heavy coverage want to avoid the worst of the ice to save on fuel and engine power.

In 2007, the year after heavy ice knocked the Seabulk Pride oil tanker from its mooring at the Kenai Pipeline Dock, Cole, with the help of CIRCAC, gained access to more ice images. CIRCAC solicited volunteers on platforms and service vessels to take ice pictures and fill out observation forms twice a day to send to Cole.

The pictures were more consistent than the satellite images and helped Cole make better forecasts and better understand how Cook Inlet’s ice floes work. Cole’s better understanding of Cook Inlet ice became an invaluable tool when Mount Redoubt erupted this winter and tankers needed to navigate through inlet ice to the base of the volcano to remove stored oil from the Drift River Oil Terminal.

“It wasn’t the pictures that were taken at the time, it was what I had learned from the pictures in a previous winter,” Cole said, explaining how the observation pictures helped her make forecasts for the oil-removing tankers.

The volunteer photos enabled Cook Inlet ice forecasting to advance a big step forward, and the ice cameras will likely advance forecasting by leaps and bounds. The cameras are being calibrated so that Cole will be able to accurately measure the size of the ice pans she is seeing and the speed at which they are moving. The cameras will also help her better determine ice thickness, a task which has been difficult to accomplish with satellite images.

In satellite images, thicker ice is usually lighter. But ice can also become lighter due to snow cover. Cole usually tries to determine ice thickness by keeping track of temperatures in an area and using a formula to obtain a theoretical ice thickness. And sometimes she receives feedback from ships as they move through the inlet.

“Ships go through ice all the time and then tell me this ice is 18 inches thick or this ice is 4 inches thick and sometimes they holler at me because the ice is way thicker than I thought,” Cole said.

The cameras could be helpful in making these determinations, because by looking at video-camera images of upward-rafting ice, Cole will be able to easily see how thick the ice is.

The CIRCAC cameras will be much more useful than the Mount Redoubt and Homer Spit cameras, because they will be aimed and calibrated for optimum ice viewing. Additionally, Cole will be able adjust her view by remotely moving the cameras from her office. Pressurized, bubblelike enclosures will prevent condensation buildup on the cameras, and pixilating software will protect the privacy of platforms and other sensitive sights that might fall within the cameras’ field of view.

“There’s a real possibility to do a lot with them,” he said. “For instance, locate a downed plane, a helicopter or boat in distress or oil in the water. There’s a lot of possibilities once you have eyes throughout the inlet.”

The video, which will also be archived, might also be used to help spot whales traveling through the inlet, he said. Eventually, CIRCAC would like to set up a portal on its Web site, allowing anyone to view ice through the cameras from any computer.

The video might also spur new university research into understanding Cook Inlet ice in ways that were previously out of reach.

“We really are elevating the quality of observations in Cook Inlet for ice to a remarkable level,” Cole said. “I think we’re going to have one of the best inlet ice programs in the world when this is all said and done.”