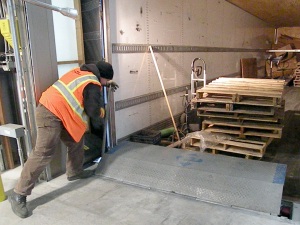 Photo by Jenny Neyman, Redoubt Reporter. James Epling, a warehouse worker at Lynden Transport’s new facility in Soldotna, sets dock plates into place on a trailer. The plates are outside the bay doors, so the doors can be closed to minimize heat loss.

If thoughts of the shipping industry conjures up images of fuel-guzzling big rigs spewing exhaust fumes while chugging up hills or idling in parking lots, it’s time to park that imagery. There’s a newer, more eco-friendly business model pulling into the lot.

For Lynden Transportation, green is no longer just its logo color, it’s now a principle by which to operate. The company recently moved into its new facility on the Sterling Highway across from Big Johns gas station in Soldotna. It’s the “greenest” terminal the company has ever built.

“This is the first service center designed to leave the smallest environmental footprint and allow for the most energy efficiency in operations,” said Kyle Fisher, service center manager.

It’s not the first foray the company had made into energy efficiency. The facility is built with ideas and innovations that have been tried out at other locations, said Boyd Jorgensen, operations manager. But designing and building a brand-new facility with green in mind allowed the company to incorporate energy-saving ideas even more so than retrofitting an existing facility. In turn, processes and technologies tested at the Soldotna site will be picked up at other Lynden locations.

The location of the facility in itself was a significant efficiency upgrades. Lynden’s central peninsula hub, built in the early 1980s, was on the Kenai Spur Highway north of Kenai. That meant trucks coming in from almost everywhere — Anchorage, Whittier, Seward or Homer, had to make the turn onto the Spur in Soldotna and tack about another 15 miles onto their trip. 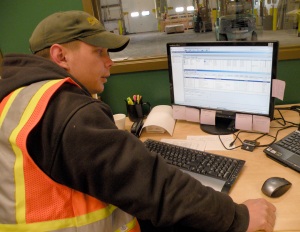 Photo by Jenny Neyman, Redoubt Reporter. Boyd Jorgensen, operations manager in Soldotna, demonstrates the routing software used to keep track of trucks, schedules, routes, freight and other details of Lynden Transit’s operations. In an effort to be more energy-efficient companywide, the Soldotna site is pioneering new and enhanced practices, like planning routes as efficiently as possible, to save time and fuel.

“One of the driving forces moving to this location was it’s more centrally located. It allows us to be more efficient with how we plan routes and deliver freight. We can plan according to the best routes and most efficient routes. Now freight coming from Anchorage is a much shorter trip. We’re able to cut miles off our overall operation,” Fisher said.

In designing the new facility in Soldotna, small details were taken into consideration, like having recycling bins for office staff and drivers to use, using only one printer for the three office staff and zoning offices for separate heat. Big details, like facility layout, also were carefully planned.

For large-volume customers like Fred Meyer, their containers are all grouped in the same place. Trucks can drop off an empty and pick up a full at the same spot.

“Everything is located where it needs to be to turn around and go,” Jorgensen said.

A bull rail lines the fence to the right of the yard, with electrical outlets to power refrigeration units. 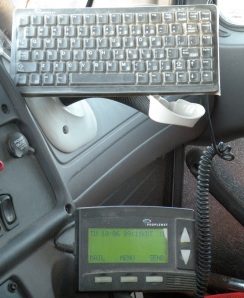 A computer console in a truck, used by Lynden drivers to interface with routers.

“We’re moving away from diesel,” Jorgensen said. The facility is also getting new electric forklifts.

The trucks, themselves, have had a bit of a makeover. Lynden is using smaller, one-axle trucks that use less fuel than the 2,000- to 2,500-pound rigs. The truck’s governors are set at 62 mph instead of 65.

All aspects of the yard are meant to promote more efficient movement and cut down on idle time. That even goes for the staff and visitors parking area in front of the building. There’s a “no idling” policy in place, Jorgensen said, with plenty of plug-ins available so vehicles can be properly warmed in the winter to cut down on cold starts and the extra exhaust that comes with them.

Lights throughout the facility are energy efficient. Lights in the yard are on solar timers, to only kick on when it gets dark enough. The high-output lights around the loading bay doors are cooled with fans to boost efficiency.

In the loading bay, the dock plates that slide into place onto the opened containers are located on the outside of the bay doors, so the doors don’t have to be left open, letting heat out, while containers are parked there.

Each is a small change, in and of itself, but can add up to big reductions in energy usage. Lynden was the first transportation company to achieve the SmartWay designation, in 2008, Jorgensen said. SmartWay is a collaboration between the Environmental Protection Agency and the freight industry meant to improve energy efficiency and reduce greenhouse gas emissions.

“The way the economy was going, and fuel prices. Obviously, fuel is getting rarer. Lynden Transport is trying to step up and do its part to conserve energy,” Jorgensen said.

Part of the changes are physical, and others are systematic. Special routing software is used to calculate the most efficient routes based on several factors — distance, amount of freight and type of equipment available.

“We want to use the least amount of time and miles, but we also want to make the delivery on time,” Fisher said. “The idea is to put the largest amount of equipment on the road because you get the most efficiency hauling the most freight.” 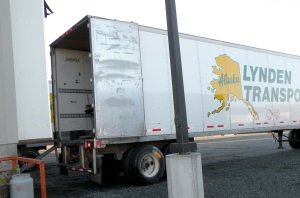 Photo by Jenny Neyman, Redoubt Reporter. A Lynden Transport truck pulls up to a bay door at the company’s new facility in Soldotna. The yard is designed to maximize efficiency and fuel savings by minimizing the amount of driving around that is done.

Radios have been supplanted by computers in trucks, which track information and communicates with the terminal.

“We get more information from trucks and can determine what the most optimum mileage on the highway is,” Fisher said. “It sends a message if the driver brakes too hard, speeds or gets into an accident. In real time I can react to a driver’s behavior, whether good or bad.”

It’s a significant change toward interconnection in an industry where being alone on the road for hours — if not days, weeks or longer — was the norm. But Fisher said the company is embracing the innovations.

“We’re implementing changes systemwide, throughout the service centers,” he said. “With each change comes new challenges. We’ve got a great group of drivers. They’ve worked hard to accept changes and made suggestions to improve our overall service.”

Having just moved into the new facility at the beginning of September, Fisher said it’s too soon to have definitive figures on energy and fuel conservation, but expects that all the little changes here and there will result in a noticeable difference.

“Being able to adapt, to create a new, most-efficient plan every day. We save a few dollars every day, and over time they add up,” Fisher said.

“It’s nice to eliminate old habits of decades past and develop brand-new ones, the best way of doing business,” he said.