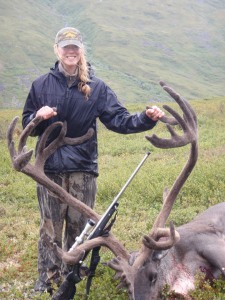 Kasilof’s Kristy Berington is no stranger to hard work. After high school she served four years in the Army National Guard. In summer she competes in marathons and mountain-running events, and in winter she runs sled dogs and is a two-time  Iditarod Trail Sled Dog Race finisher.

So why should fall be any different for pursuing extreme labors of love?

Berington and fellow Kasilof musher Paul Gebhardt drew registration and permits to hunt caribou and Dall sheep up in the Tok area, two species of game in terrain that is not for the faint of heart to pursue.

Unlike leisurely canvassing to drop a nearly motionless roadside spike-fork moose, caribou and sheep are two restless species, regularly on the move in the search of food. They can be there one day and gone the next. Even when caribou are where a hunter expects, the animals may not be still long enough to line up a clean, broadsided heart-lung shot.

Caribou also have keen senses and are quick to run if they hear, see or smell something out of the ordinary. Once on the run, the rugged terrain they favor is thigh-numbingly humbling to two-legged climbers. And then there’s the weather around Tok this time of year, which on a good day is best described as a tempest of rain and hail.

None of these factors were enough to dissuade Berington. In the course of her other hobbies she has seen the best of the worst kind of terrain and weather. In terms of her hunting skills, they were honed long ago.

“I grew up in Northern Wisconsin and hunted white-tailed deer with my dad,” she said. “Down there everyone hunts. I remember being allowed to miss school if I brought in my deer tag, and if you didn’t have orange on in fall, you were some kind of misfit.”

As Berington came to Alaska four years ago, she brought her passion for hunting with her and has pursued game every year since she became a state resident. Not a fan of road hunting, she has challenged herself to try to bag a bull moose in remote locations, such as the Tustumena bench area. However, a bull with a billboard-sized rack has always eluded her.

“I’ve hunted moose every year and never gotten anything, so I was really getting eager to bring down a big-game species,” she said. After drawing the caribou permit, it seemed like a great opportunity to switch species.

“Caribou are also my favorite to eat, so that was nice, too,” she added.

Berington and Gebhardt packed up and headed north. They knew from past experience and learning about their quarry that this likely wouldn’t be an in-and-out hunt. They were going to have to go far into the backcountry and stay there to find and bring down their prey.

“We packed enough gear and supplies to stay out for two weeks,” she said. “We rode in on two horses and had two pack horses behind us carrying it all.”

Horses can make lugging gear easier, but there was nothing simple about the pathless trail they had to cut to get to where they wanted to be.

“The trail was rough,” Berington said. “The horses had to keep rearing up to mash down the willow bushes, and there was a lot of sections with rocks so their shoes kept slipping and we’d get off and walk them. And there were lots of stream crossings, some up to their bellies.”

They rode for nearly a day before setting up camp in a creek valley that forked wide, and loomed in the shadow of steep mountains capped in white.

“The mountains there are different. They’re sharp and jagged and we ran into a foot of fresh snow at the top,” she said.

Inclement weather was an understatement. It poured rain from dark, gray clouds that hung low in the sky and enveloped the tops of the mountains. But this made easy the decision of which species to go for first.

“There was no way to hunt sheep in those conditions. We couldn’t see a thing up high, so we decided to go for caribou,” Berginton said.

Getting in a day before the opener, they had time to scout around. They spotted lots of bull moose, a huge brown bear and a few caribou, including a bull with an astounding rack. His large main beams swept back from his forehead before spreading outward and upward. Large, shovel-shaped brow tines reached out above his nose, while up high on his rack the antlers branched off into myriad points.

“The hunt wasn’t open yet, so we hiked around and got a plan if we saw him or others the next day,” she said,

To their surprise, less than 24 hours later Gebhardt saw something on the horizon.

“Paul went out to take care of the horses and he saw his antlers on the skyline about a quarter mile from where we were,” Berington said.

She grabbed her gear and took off after the caribou.

“We spent the next hour stalking him. We pretty much crawled up to him, but we were fortunate. He was uphill, but down in kind of a depression eating, so he didn’t have a good idea of what was around him or that we were sneaking up on him,” she said. “The pouring rain also kept our scent down.”

She got to within 100 yards before dropping the crosshairs of her Winchester 300 on him. He got a glance of her just before she squeezed the trigger, but didn’t seem to recognize the danger from a crouching woman with a rifle.

“I don’t think he had ever seen a person in his whole life,” she said. “He saw me moving a bit when I kneeled and he looked like he was going to step toward us for a better look.”

Berington didn’t give him a chance.

“I was really excited. I could feel my heart pounding, but being in the military I learned how to shoot straight, even under pressure,” she said. “I squeezed the trigger and shot him in the shoulder. He turned to run away and I shot again as quickly as I could. The second shot hit him in the brisket and he was done.”

As they got to the downed animal, Berington was even more impressed with the bull she had bagged.

“I’m 6 feet tall and his antlers came way up on me, and I couldn’t put my rifle across his rack it was so wide,” she said. “It was even bigger than the one Paul has on his wall at home.”

The bull was still in velvet, but after spending several hours butchering the animal and hauling down roughly 130 pounds of meat and the massive antlers, they got so scratched up from brush that Berington decided to peel them.

She was proud of her accomplishment, but humble about the circumstances that led up to her getting the caribou. She embraced the Alaska weather as assisting her efforts.

“Had it not been raining we probably would have gone for sheep and Paul had the permit, not me,” she said. “So I guess everything happens for a reason.”