Copper the culprit? Amphibian deformation studies continue on the Kenai 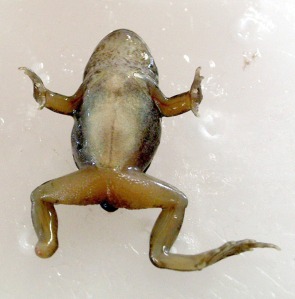 What’s worse than being a frog — a major link in the food chain and a creature that’s acutely susceptible to deformations from exposure to contaminants or other changes in their environment?

Try being a biologist attempting to tease out definitive conclusions from studying them.

“It’s really hard to nail these things down. That’s what makes science challenging,” said Meg Perdue, a biologist specializing in environmental contaminants for the U.S. Fish and Wildlife Service.

She’s one of the researchers involved in continuing studies of amphibians on national refuges in Alaska, including the Kenai National Wildlife Refuge. The latest iteration of that monitoring project is a study focused specifically on the Kenai in an attempt to discern why, out of the five refuges monitored in the state, the Kenai is showing a higher incidence of frog deformations than any other.

“Out of the monitoring work, when we saw higher rates in Kenai, we focused a study trying to come up with correlations with the malformations,” Perdue said.

This program of amphibian monitoring is a nationwide effort dating back to the mid-1990s when a high number of amphibian deformations — specifically, frogs with extra limbs — was noticed on a refuge in Minnesota.

Frogs are considered a bellwether species, a sort of canary-in-the-coal-mine indicator of changes in an environment, because amphibians are very susceptible to contaminants and other changes in their ecology.

“They tend to bridge multiple environments and their developmental process is out in the environment, unlike mammals and birds that are more protected. Bird eggs at least have a hard shell, and mammals, their embryos are internalized, but frog eggs are just out there in the media and therefore have lot of exposure because of how permeable amphibians are in terms of that interface with the environment,” Perdue said. END_OF_DOCUMENT_TOKEN_TO_BE_REPLACED

You know it’s been a quiet wildfire year on the Kenai Peninsula when the season’s biggest blaze comes in late October, doesn’t warrant firefighting effort and might even have gone unnoticed were it not smack underneath the main flight path between Anchorage and Kenai.

Howie Kent, fire management officer with the Alaska Division of Forestry for the Kenai Peninsula and Kodiak Island, said that a small wildfire was reported Oct. 13 in Chickaloon Bay on the shore of Turnagain Arm, about 20 miles west of Hope and a few miles southeast of Point Possession. It’s been reported as being about 1,000 feet long by a few thousand feet wide.

“We’re monitoring it. A lot of aircraft fly over there and we have received a lot of calls on it, and we sure appreciate those calls. We get information on it and can check reports against each other,” Kent said.

The fire is on Kenai Peninsula National Wildlife Refuge land classified as limited response. Kent said the refuge and his office are in agreement to keep an eye on the fire but to let it burn unless it spreads closer to habitation.

“It’s not a threat to people or structures or all that, so we’re going to allow it to burn and maybe create a little moose habitat and such. They (refuge managers) are definitely aware of it, but because it’s so late in the season and we’ve received some rain here, we’re going to allow that fire to do what it would naturally do,” Kent said. END_OF_DOCUMENT_TOKEN_TO_BE_REPLACED 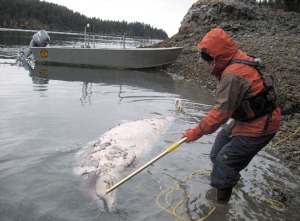 Photo courtesy of Homer Tribune. A worker hauls to shore the body of what is thought to be a Stejneger’s beaked whale in Tutka Bay last week.

If so, professor Debbie Boege-Tobin and her students enrolled in the Semester By the Bay Program at the Kenai Peninsula College’s Kachemak Bay Campus are bestowed with an unusual opportunity.

Boege-Tobin and three students in the program observed the necropsy of the whale Saturday. They gained an up-close and personal look at the 13-foot adult female. The cause of death is unknown.

Dave Seaman, a local boatwright, was in Tutka Bay on Friday when he spotted the whale near the shore.

“It was leaning against the rocks. I grabbed a hold of the tail and wrapped a rope around it then towed it to a dock where I tied it up,” Seaman said. “It didn’t smell too bad, and it was all in one piece. It had a few skin abrasions from rolling on the rocks, and a strange look, like a porpoise’s face pinched into a beak.”

“Not much is known about the Stejneger’s beaked whale. It is a deep-diving species that they believe feeds almost exclusively on squid. We aren’t out of their range, but it’s unusual to see one here,” Boege-Tobin said. “We had the Homer Veterinary Clinic donate services to X-ray the jaw. The way to distinguish it from other whales is to study their tooth and jaw morphology.” END_OF_DOCUMENT_TOKEN_TO_BE_REPLACED

8 legs, new tattoo, what’s an octopus to do?

Photo courtesy of Homer Tribune. A giant octopus is found aboard a fishing vessel.

What marine animal can unscrew the lid of a jar, squeeze into a water jug, shoot out clouds of ink to mimic its own shape and tear off scientific tags meant to track him?

The octopus holds uncanny intelligence indicating an ability to problem solve, said marine biologist and diver, Reid Brewer. He is at work on a doctorate with the University of Alaska Fairbanks as he gathers baseline studies of octopus habitat. Large crowds attended his weekend lectures during the National Wildlife Month at the Alaska Islands and Ocean Visitor Center in Homer. The talk, “Octopus and other creatures run wild,” was accompanied by photos of the cephalopod’s little-known underwater world off the Aleutian Islands.

“This is such a fun talk to give because people really like to hear about octopus, and they are really curious about these creatures,” Brewer said. “This especially is a popular topic with fishermen. For a lot of people, the octopus is an amazing, favorite critter.”

Giant octopus are rumored to be up to 30 feet long. But the largest Brewer ever witnessed came to 18 feet and weighed about 600 pounds. END_OF_DOCUMENT_TOKEN_TO_BE_REPLACED

Photo courtesy of Joseph Robertia, Redoubt Reporter. Dogs wait in crates for transport by their owners. In case of an emergency on the Kenai Peninsula, owners need to make plans for caring for pets, which might not be allowed in shelters.

Catastrophic earthquakes, devastating tsunami, massive wild-land fires, highways and roads washed out by floods or buried by avalanches in winter — these are just a few of the possible crises that could plague the Kenai Peninsula. In worst-case scenarios it won’t just be people, but also their pets, that may need assistance.

“It’s something that was learned after (Hurricane) Katrina,” said Eric Mohrmann, director of the Kenai Peninsula Borough Office of Emergency Management.

There was no evacuation or shelter plan in place for animals, and many pet owners attempted to stay home during the emergency rather than seek safety in shelters where pets were not allowed. They resisted evacuating without their pets once danger was upon them. For the pets left behind, there was no one to care for them. By the time pets began being rescued, many were never reconnected with their owners.

Under Borough Mayor Dave Carey’s request, and to comply with the 1996 Pets Evacuation and Transportation Standard Act, a 10-person working group has formed and will meet monthly to address this issue in the event of a local or state disaster. It is made up of emergency response personnel from the borough OEM department, representatives from animal shelters in Kenai, Soldotna and Homer, as well as Alaska’s Extended-Life Animal Sanctuary in Nikiski and the Alaska SeaLife Center in Seward. END_OF_DOCUMENT_TOKEN_TO_BE_REPLACED

Rocktoberfest, featuring Static Cycle, Stadium, AK Free Fuel, Fighting Silence and George and Sam, will be at 7 p.m. Friday, Oct. 28, at the Renee C. Henderson Auditorium at Kenai Central High School. Doors open at 6 p.m., and a 21-and-over party will follow at Hooligan’s in Soldotna. Tickets are $15 in advance or $20 at the door, available at Hooligan’s and at groovetickets.com. 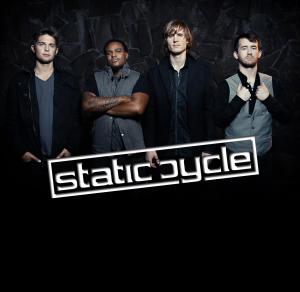 Don’t let the name fool you, there’s nothing static about Static Cycle these days.

The Alaska-grown rock band continues to explore its career nationwide, in part due to more and more fans hooking into their compelling songwriting and insistent sound, and in part due to the band’s hard work making sure their established base as well as new fans keep having something fresh to listen to.

These days, the band is in a cycle of performing, writing, recording, releasing albums, branching into different sounds and venturing down new paths in life. So, anything but static.

The band recently wrapped up national tours with Drowning Pool and Red Jumpsuit Apparatus and was back in Alaska last week for a two-and-a-half-week run of performances in the state, including a show Saturday in Kenai and one last Saturday at the Alibi in Homer.

“Today, this is the first time we’ve all been in the same room at the same time in probably about a month,” said Jared Navarre on Thursday, lead singer and songwriter for the group, who spent some of his childhood years in Kenai. “It’s been a crazy 2011 for us.” END_OF_DOCUMENT_TOKEN_TO_BE_REPLACED

Walking in the woods at night can be unnerving. On Friday, being in the forest will be a downright frightening experience, as the living dead will be walking and running during the Tsalteshi Trails Association’s Spook Night.

“This will make it different than just putting on your running gear,” said Carly Reimer, one of the organizers of the event, which will feature a five-kilometer Zombie Run for adults and a one-kilometer Trick or Treat Trail for boys and ghouls.

“We’ve always had a kickoff event around this time. Usually it’s an orienteering event, which can be challenging and a bit daunting for some people, so we wanted this to be more of a community membership drive separate from that. We’ll still have the orienteering event, but it will be closer to Thanksgiving,” she said. END_OF_DOCUMENT_TOKEN_TO_BE_REPLACED