Organizers of the 2,000-mile Alaskan Wet Dog Race, planned to be the longest-distance endurance personal watercraft race in the world, are waiting out a public comment period to see if they will get approval of a permit from the Alaska Department of Natural Recourses that they need to proceed.

But they don’t have to wonder if they’d get enough entrants to make the race a reality, in the wake of a wave of comments coming in from racers all over the world, to the effect of:

“We have gotten a tremendous amount of interest. In fact, that’s where we made the call that we have to (limit entries) to 500 teams. We’re very pleased that we actually have 27 states, and that does not count Alaska, that are interested, and 37 countries so far. And we have tremendous support from here in Alaska — 15 or 20 teams,” said John Lang, race director.

“I had a guy from Australia just call me and he said, ‘I’m in.’ Actually, he said, ‘Is this thing next week? I can’t really tell when it is. Well, if it was next week, I’d be there. I want you to know,’” Lang said.

The race, which is planned to go from Prince William Sound around the Kenai Peninsula, up Cook Inlet as far as Kenai, down around Kodiak, out the Aleutain Chain to False Pass, up through Bristol Bay and finishing in Iliamna in Iliamna Lake, will not be next week. If permits are approved and logistical work is completed as smoothly as Lang hopes, the inaugural run of the Alaskan Wet Dog would be May 1, 2013.

So far, it’s already been several years in the making.

Lang, of Wasilla, has himself pioneered a lot of cold-water ocean riding on personal watercrafts, also called jet skis, Sea-Doos or wave runners, and has operated a jet ski tour business in Prince William Sound out of Whittier. Though he’s never done personal watercraft racing he has researched the sport, including the handful of long-distance, 1,000-mile “jet raid” events around the world, and the thousands of small, circuit races, such as relaying around buoys in a lake or bay. From his experience and research, Land said he thinks the world is ready to up the ante on these events, and Alaska is the place to do it.

“Obviously the scenery is going to be very appealing to everybody. Just the out and out experience of being able to go to these areas where very, very few people in the world ever get to see and experience. And just the thought of being able to complete such a prestigious event,” Lang said.

The race is structured for teams of two with a $35,000 entry fee per person, which covers all costs — such as fueling and equipment — needed for the race. With 500 teams, Lang said the race would pay out $4 million — $2 million to the winning team, and $2 million paid out to the top 50 places. The large purse plus the prestige of this being the longest race of its kind in the world has been a tantalizing carrot to hook interest in the race, Lang said.

“The market research that we have tells us that people will not come to Alaska for small events. So in order to draw people here, to get the interest, we had to go big. Being big also offers us the ability to offer the incentives to capture those racers, that participant level we have been looking for,” Lang said. “They complete an event like this and get that life-changing reward of a million bucks, that, to them, is one of the biggest draws at all.”

Among the 37 countries from which Lang has gotten letters of interest are Thailand, Brazil, Finland, Sweden, Newfoundland, six teams from Japan, and one from New Caledonia, in the southwest Pacific Ocean east of Australia.

Lang said that he’s hoping to use the event as a way to showcase Alaska to the international community.

“We think it’s a great opportunity to help educate the rest of the world on how the U.S. government and Alaska manages wildlife and the benefit that comes from responsible management. I really think that this is a good opportunity for that because a lot of these other countries are not going to have the same level of oversight and management that we do in the United States,” he said.

The fuel range for a personal watercraft is about 50 miles, so frequent refueling will be necessary to cover 2,000 miles. Lang said organizers plan to do fueling in communities along the way, so as to take advantage of already existing dock facilities, safety equipment and spill response plans. The proposed course would take racers through 26 checkpoints, including some remote villages that rarely attract attention from the rest of the world. Lang said he plans to invite representatives from the checkpoint communities to participate in orientation sessions for the racers.

“A lot of countries coming here are not going to be familiar with the little towns and villages that only have 60 to 200 people. We want them to be aware of how you respect their villages, and we’re going to encourage that each town and village come help teach and orient the racers on what their town or village is like and the culture that they have,” Lang said.

Cultural awareness is one of many sessions racers will have to complete in order to participate.

“This event is going to be operated with safety as its top priority, but also we’re promoting safe and responsible watercraft riding. Racers will go through a series of mandatory orientation classes,” Lang said.

Racers also must complete classes in navigation, cold-water survival and go through a boat and equipment check, making sure they have all the necessary safety equipment and know how to use it. Part of the entrance fee covers equipment that race directors will provide — a drysuit, waterproof marine handheld radio, a satellite phone and a personal locator beacon for each racer, and a location transponder on each boat.

Teams of two must travel together for safety purposes. If one racer has trouble the other is there to help. 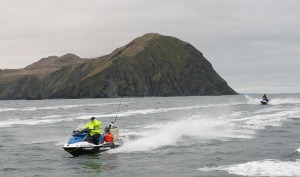 Organizers are expecting the scenery of Alaska to be one of the appeals to draw woldwide participation in the Alaskan Wet Dog Race.

“If both break down they can call race headquarters and we can dispatch a boat to them (Lang said there will be 127 safety boats stationed along the course). If they’re unable to reach us on their marine handheld radio, they can pull out their satellite phone. If the radios fail and the phones fail, they could pop their personal locator beacon,” Lang said.

And if all that goes awry, race directors will be tracking racers by their boat’s location transponder, to gauge their time and make sure they aren’t veering from the course.

“If we see these two transponders bobbing around out in the middle of the ocean not going anywhere and we haven’t heard from them and they haven’t checked in, we’re going to dispatch a boat to them and find out what’s going on,” Lang said.

A racecourse orientation will show videos of each checkpoint, detailing the rules of each area and showing where to go and where not to go — for instance, coming into Valdez racers must stay to the left and away from the oil tanker terminal. Lang said there also will be a strong emphasis on wildlife awareness.

“Teaching them about the laws and rules of the U.S. in how you do not chase whales, you do not chase sea otters, you stay over three miles away from sea lion rookeries and haul-outs. And we’ll orient them and give them information and show them where all these rookeries and haul-outs are. We’re adamant there will be absolutely no harassment of wildlife. All laws and rules will be complied with,” Lang said.

Racers must sign off that they’ve read and understood all the rules and regulations, and face a stiff penalty of forfeiting their $70,000 team entry fee if they are disqualified for breaking the rules.

Lang said he expects the race to take up to two weeks, with a start in Whittier staggered over five days. Teams will start in waves of 35, with one team leaving every two minutes, and three waves starting each day. Teams must take a minimum of 64 hours rest time, with 32 hours taken between Whittier and Kodiak, and the other 32 between Kodiak and Naknek. That works out to about 12 hours of riding and 12 hours of rest per day. If teams average 30 mph and take no more than the mandatory rest time, they should finish in 5 1/2 days, barring bad weather or breakdowns, Lang said.

“If they’re out in the middle of the ocean they are not going to be going fast, I can promise you. I’ve been out there and I can tell you when it’s rough, there are days you cannot go more than 20 miles per hour,” he said.

The comment period on the permit Lang submitted to the Department of National Resources Division of Mining, Land

Organizers pause in front of crab boats in Kodiak during their 2009 trip.

If the permit is approved, race organizers will start firming up logistical details. So far he and his crew have done two trips to scope out the racecourse. In 2009 they went from Anchorage to Kenai, Anchor Point, Port Graham, Williamsport on the west side of Cook Inlet, Port William on Shuyak Island, Kodiak, Old Harbor, Alitak and Larsen Bay. Last summer they visited Whittier, Valdez and Cordova. Next year they hope to cover from Chignik the rest of the way to Iliamna.

They may find some logistical surprises along the way. In Cook Inlet, for instance, personal watercraft are not allowed in Kachemak Bay, so organizers already had to scratch plans of stopping in Seldovia. In Kenai, City Manager Rick Koch said he remembers meeting briefly with a race representative in 2009, then heard nothing about the race, and only recently got an email about it. He said he has not had any detailed discussions with the race organizers, such as informing them that Kenai, with the only fueling facility located in the mouth of the Kenai River, may not work as a checkpoint.

“The Kenai River doesn’t allow for personal watercraft in it, so if they were coming this direction that’s an area they could not go in. Unless we gave them a special permit they could not run up there,” Koch said.

Lang said he has held off on port-specific planning until the DNR permit is resolved. If the permit is approved, then begins the detail work that will go into putting on the kind of race he hopes the Alaskan Wet Dog will be.

“We’re trying to promote a professional, world-class, prestigious event that racers will come from all over the world to participate in,” he said.