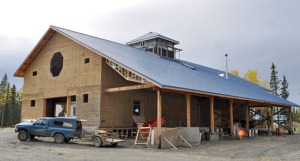 Photo by Joseph Robertia, Redoubt Reporter. An ongoing project to build a 20,000-square-foot straw-clay barn and workshop in Ionia is taking the community’s eco-building interest to new heights. The straw-clay material takes the place of more traditional forms of brick, wood and synthetic insulation.

The community of Ionia, in the heart of Cohoe Loop, south of Kasilof, is made up of roughly 50 people — from newborns to elders. Just as their generations are renewing, so, too, is their lifestyle on their 160 acres of land.

Renewable energy technologies — solar, wind and biomass projects — are well under way there. Organic gardens, greenhouses and grain trials help to feed them throughout the year. They’ve lived in tepees but more recently have moved to cutting and milling spruce trees to build log homes and furniture, and they replant and grow trees to renew their wood supply.

These days, an ongoing project to build a 20,000-square-foot, straw and clay barn and workshop at Ionia is taking the community’s eco-building to new heights — figuratively and literally.

“I’ve typically done smaller structures. To my knowledge this is the largest straw-clay structure in the U.S., and possibly the world,” said Lasse Holmes, of Homer, who has partnered with Ionia to complete the three-story project, which began four years ago.

Holmes, who some might remember from starting the Homer Brewing Company in 1996, got 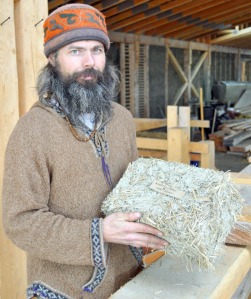 Lasse Holmes, of Homer, shows one of the straw-clay “bricks” he has made.

started in straw-clay technology in 1999 after reading a book on the subject. Piquing his interest, he continued his education by attending workshops on the subject in British Columbia. More recently he developed cinderblock-sized “bricks” made of straw-clay, which can be used along with, or instead of, the traditional methods of packing walls with straw-clay.

“I’ve been getting better every year,” he said.

The Ionia project is his largest undertaking so far, going well beyond just mixing the ingredients in a wheelbarrow, as is typically done.

“We begin with several dump-truck loads of locally obtained Kasilof clay, which is some of the highest-quality clay around,” said Ionia community member Cathy Creighton.

Still, the clay had to be further refined for the project. Holmes explained how a skid loader was used to dump clay into a soil shredder to break up clumps. The fine clay was then dispersed into water and mixed in three mortar mixers to create a slip, which was then screened twice to further remove large particles.

The mixture was then pumped into an elevated tank to settle and let silt drop off through passive purification. From there the mixture is gravity-fed into a large, custom-made tumbler, where Delta Junction straw is fed in by the handful, until every blade of straw is coated in clay.

“It’s a lot like tossing a salad,” Holmes said. “And once it’s mixed, we age it overnight to 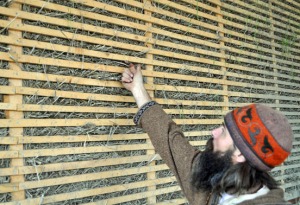 Holmes inspects a straw-clay wall in the structure. Until the wall fully dries, seeds within the straw sprout green shoots, making the wall seem alive and growing as the tiny blades of grass undulate in the breeze.

soften the straw fibers and make a more malleable, sticky structure, which is then packed into the walls the next day.”

Creighton said that the construction process reinforced the Ionian members’ connection to nature, and each other.

“The whole community took part. Every day we would mix and tumble it together, and pack it into the walls by hand. From our viewpoint it wasn’t work, it was an activity. And one men, women and children could take part in.” he said.

In addition to the social aspect of the building process, the straw-clay walls come with efficiency advantages.

“Due to the high clay content, clay-straw walls are hygroscopic, which means that they have the ability to moderate and balance indoor humidity. The wall is constantly breathing. Also, because each blade is coated, the clay makes it not rot or compost, and it’s totally fireproof,” Holmes said.

Since the straw-clay mixture needs time to dry passively, construction ended in August while 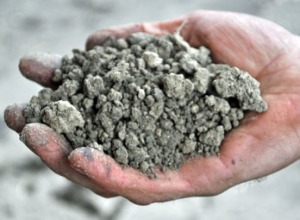 temperatures were still warm. Until the wall fully dries, seeds within the straw sprout green shoots, making the wall seem alive and growing as the tiny blades of grass undulate in the breeze.

Several straw-clay packing methods have been utilized in different walls of the structure, and with differing material proportions. Later this winter, the walls will be measured with a hand-held, infrared laser thermometer to determine which method works best. Inner walls are plaster, while outer walls are coated with a lime plaster and wood siding to protect the walls from rain and snow.

In areas of the structure that will be unheated, the straw-clay walls are 1.5 feet thick, and they 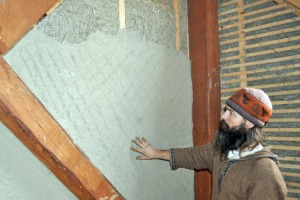 are 2 feet thick in areas that will be heated. As heat for the building goes, it, too, will be generated using an emerging eco-friendly technology — also built by Holmes — known as a “rocket mass heater.”

The stoves are encircled in a masonry arch made up of a clay mixture and fire brick, and they utilize vertical and horizontal heat by way of long masonry benches where people can sit to stay warm. The stoves also burn not just wood, but also creosote and smoke, as well, expelling carbon dioxide and vapor instead.

The stoves run hot, with internal temperatures getting as high as 2,000 degrees Fahrenheit, 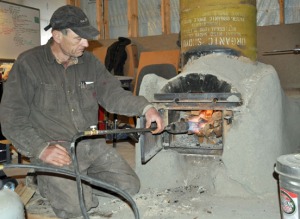 Heat for the building will be generated using an emerging eco-friendly technology — also built by Holmes — known as a rocket mass heater.

but they do so safely via three separate stovepipes  — an outer one that is insulated from the innermost one, and then a covering over both. Kits are typically $2,000 to $4,000, depending on size, or they can be built for less than $1,000 for those who are willing to use recycled materials. By comparison, a traditional masonry stove might cost $20,000 to $30,000.

“Built with local clay, sand, gravel and salvaged stovepipe, these can be built for very cheap,” Holmes said.

Between the insulating properties of the straw-clay walls and the efficiency of the rocket mass heater, the Ionians should be able to greatly reduce the amount of firewood they would have used to heat a similar-sized structure constructed and heated with more mainstream building materials and heating devices.

“With everything we do we have conservation in mind,” Creighton said. “It just makes a lot of sense to us.”