By Zirrus VanDevere, for the Redoubt Reporter

Dymphna De Wild has an exhibit currently up at Gary L. Freeburg Gallery at Kenai Peninsula College’s Kenai River Campus. She was introduced to the college by Freeburg, who has worked with her on the East Coast and was impressed with her artwork.

This particular exhibit comprises unframed original drawings and prints made from journal entries, as well as from a mixed-media piece. The work is all on sturdy, naturally deckled paper and hangs well with T pins rather than framing.

Artwork by Dymphna De Wild is on display at KPC.

De Wild more often has full installations with varying sizes of sculptures in her exhibits, generally filling the entire space with fanciful and exotic shapes, textures and hues. Though I wouldn’t necessarily compare her work to Tim Burton’s, there is something about the way she approaches her art that makes me think of the work I’ve seen from him.

In an exhibit a couple years ago at the Museum of Modern Art in NYC, I was able to peruse room after room of Burton’s creations, beginning chronologically with his very first doodles and filmmaking from when he was still in grade school. There was an integrity and coherence to everything he did and even the early work was identifiable as specifically his creation.

De Wild also seems to have this quality, though her work seems gentler and more introspective. 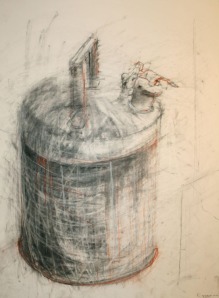 The object itself obviously entrances her, and her active mind plays with possibilities that are not limited to any one media.

The largest piece in the KPC exhibit is a print of a piece that was basically deconstructed and reformed using the wet paper strips that ensued from the process. Four other pieces are digitally rendered but also ensue from the same original image. Other prints are straight from her journals, where she has combined ink and ink washes with her own writing to create ministories that give just enough information to be intriguing.

The most exciting for me, by far, are the original drawings of objects that have captured her fancy. They hold more of an essence of the things than trying to be strictly representational, and therein is the real magic.

Though the marks might appear somewhat random to the uninitiated, true lovers of line and of

drawing can appreciate the sublime and musical way she allows graphite to touch paper, and when and where she allows in a little color. She has described the objects as themselves, but even better. She has allowed them to be mystical and poetic.

De Wild grew up in the Netherlands and has been living and working in rural Virginia for the past eight years. She holds a bachelor of fine arts degree from the Corcoran College of Art and Design in Washington, D.C., and a master of fine arts degree from James Madison University in Harrisonburg, Va. She teaches photography, printmaking and sculpture (but, interestingly, not drawing at this point) and moved to the states because her husband got work in D.C.

She mentions that she has always been “interested in the idea of expedition, the outpost, and the collecting of items along the road,” and some of her installations have reflected those interests, such as “Art from the Outpost,” “Field Notes” and “New Territory.” She calls this current body of work “Survival Series,” and although it is obviously simpler to haul paper across the continent than sculptures, perhaps one day she will give workshops and maybe even mount an installation somewhere here in this, her most recent territorial outpost.

Zirrus VanDevere is a local mixed-media artist and owns Art Works. She has bachelor’s degrees in fine arts and education.