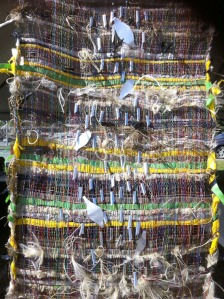 Photo courtesy of Keren Lowell. “Hooligan,” an art piece woven from recycled materials, is going on display at the Kenai Watershed Forum.

Through callousness or carelessness, a soda pop can is tossed along the side of the road, gets shoved aside by a plow truck, migrates downhill with the snowmelt and ends up in a creek, river or streambed, disturbing the health and natural function of the waterway and anything living within it.

In conscientiousness, it’s fished out, and through creativity, collaboration and education, it transforms into artwork meant to spread awareness so this cycle doesn’t have to happen over and over again.

That’s the idea behind a multipartner project this summer in which a fiber artist wove Adopt-A-Stream cleanup efforts into public awareness outreach to create an art piece going on display at the Kenai Watershed Forum office at Soldotna Creek Park.

“It was a really great collaboration. And now we’ve got a really interesting piece to hang in the office,” said Josselyn O’Connor, development director with the Kenai Watershed Forum. “When you put art in a new building, such as ours, you really want your art to spark a discussion about your mission, so that when people come into the building and appreciate the art there’s a story behind it and you can lead that right into a discussion about the work that you’re doing.”

Part of KWF’s education program involves the Adopt-A-Stream program, whereby schools study, monitor and care for a waterway in their area. Each spring the program culminates in a creek cleanup, whereby students gather up and remove all the garbage that piles up in the stream and surrounding area over the winter.

Photo courtesy of Dan Pascucci. Students at Kaleidoscope School of Arts and Science pose for a photo after their annual Adopt-A-Stream cleanup day.

“I think it’s inspiring to see young people take ownership for the place that they’re from. It’s important to build those connections to their space early on so that they care for it in the future,” said Dan Pascucci, education coordinator for KWF.

Usually the trash is bagged and left by the road to be picked up by waste management, and also to serve as a visual reminder to people of what happens when they litter. This year, though, the trash gathered from No

Photo courtesy of Dan Pascucci. Kaleidoscope students remove trash from a creek near their school in Kenai.

Name Creek in Kenai by students at Kaleidoscope School of Arts and Science had a different purpose. It was going to Keren Lowell, a fiber arts instructor with the University of Alaska Anchorage, who set up a loom at KWF’s Kenai River Festival this June to transform the trash into a treasured art piece.

“Laura (Forbes, with Alaska State Council on the Arts) knew about the festival and their project sand education program. And she said, ‘Wouldn’t it be cool to have an artist make a piece and have it be tied in with creek cleanup?’ So she started brainstorming and we started talking and I said, ‘Oooh! I’ve always wanted to do a weaving project with nontraditional materials,’” Lowell said.

She had recently gotten a hold of discarded electrical conduit. Stripping off the drab grayish plastic covering revealed a bouquet of brightly colored wires that seemed a perfect material for creating the warp of a weaving. So word got passed to Pascucci to set aside anything from Kaleidoscope’s spring cleanup at the end of the school year that could be woven into the wires.

The question was, which of the trash could become treasure?

“We’ve had everything from mannequins to bowling balls to 50-gallon barrels and a cast-iron stove we’ve pulled out from wetlands — all sorts of crazy stuff. And the typical stuff — bottles, cans. I would say at least 50 percent of what we pick up is smoking-related, like cigarette butts or packages,” he said. “Making art out of trash found at streams — that was all I knew. Having no idea what she’d want to use I saved everything from beach balls to broken hammers to electronics stuff. I think there was a sled in there. It was this whole jumble of stuff I just thought could be interesting.”

The trash was cleaned and sorted and proved to be exactly the sort for which Lowell was hoping.

“We knew there would probably be plastic. We were hoping there would be some tarplike thing. We knew that there would be cans and bottles, not necessarily flat, linear things. There were shoes we could have worked with, there were tires, there was a lot of really good debris,” Lowell said.

She and Forbes set up a loom at the festival’s main entrance and spent the two days creating a weaving with the materials, using the wires for the weft and weaving in various strips and bits of trash as the warp.

“Mostly we used plastic, a really nice green tarp, there was a rubber ball we cut up, and metal pieces from aluminum cans,” she said.

Creating the piece at the festival gave the public a chance to see the artwork in progress and have conversations about the project.

“It was a good way of introducing the idea of awareness of where things end up, the creek cleanup and having a way of talking about it without being super preachy. Talking about how this stuff ends up in your watershed, so don’t put it in there, in a positive way that didn’t feel judgmental,” Lowell said.

She also got a lot of questions about the weaving process, even with this being an untraditional use of what is usually a very traditional process.

The materials were a challenge to work with, but that’s part of what makes a project like this fun, Lowell said.

“Problem-solving is actually part of weaving — fixing broken threads, fixing cranky loom parts, if it’s not working you have to come up with a solution. It seems like the process is under constant revision, but that’s the creative part of it. It keeps you from getting bored,” she said.

Photos courtesy of Keren Lowell. Above, electronic wire twists and snarls in a loom, but eventually (below) straightens out to become the warp of a woven art piece.

The majority of a day was spent just getting everything strung onto the loom and ready to be woven.

“I knew it was going to be difficult because there’s no stretchability with wire. And I thought, ‘Oh, it won’t tangle. Well, it didn’t tangle, but there was a whole host of other complications.’ Wire twists on itself, so each wire basically had to be set free from its partner. People would come by and I’d say, ‘Oh, we’re going to be done in about an hour.’

And an hour later it was, ‘Oh, it’ll be another hour.’ But it was fun. It encouraged other ways of approaching solutions that I hadn’t counted on,” she said.

The finished product is as textural as it is colorful, about 4 feet in length by 2 feet in width. They finished it by weaving in metallic folder binders and snipped bits from soda cans to evoke the idea of fish swimming upstream. The idea for that figurative imagery, and the subsequent name of the piece, came from literal inspiration.

Taking breaks, Lowell would walk down to the river to watch kids take advantage of the abundant hooligan run that was making its way upstream.

“We watched a bunch of kids catching hooligan with their bare hands, so we named the piece Hooligan. What we decided was that salmon are like the rock stars of the fish world — everybody knows about salmon, they get all the press, they get all their pictures in the paper. But hooligan are in the river, too, even though they’re just kind of plebian. But they’re beautiful and they’re super utilitarian, and that’s kind of synonymous with the anonymity of weaving. Nobody knows about famous weavers — you don’t sign the cloth. But weaving and hooligan are both beautiful and utilitarian.”

O’Connor said she’s excited to soon have the piece on display at the KWF office. Not only will it generate questions of, “What is that?” but those will lead to opportunities to discuss the how and why of the project, as well.

“Art seems to speak to people, and if you can use art to relay your message it seems to be a wonderful way to make that connection and translation that people can appreciate,” O’Connor said. “It came together and transformed into this neat collaboration. People at the festival loved having them there, we loved having them there, and I think they had a good time themselves.”

Little by little, the Adopt-A-Stream program is seeing less trash in area streams, Pascucci said. Adding a creative approach to an educational one might help speed the solution to this ecological problem.

“It’s kind of like taking the awareness to the next level where, rather than just piling bags on the side of the stream, we took some of it and now it’s an art piece that can really start a conversation about what it’s made out of and why was that on the side of the road,” Pascucci said. “It’s a really great next step, and I hope that we can do it again.”