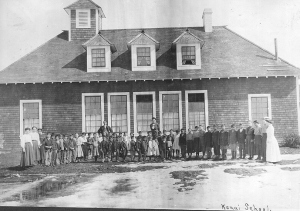 Photos courtesy of the Anchorage Museum of History and Art, Crary-Henderson Collection. The American Territorial School replaced the Russian School and became the first U.S. government-run public school in Kenai.

For the Redoubt Reporter

Seventeen years after the U.S. purchased Alaska, the government provided a fledging education for Alaska children. The Organic Act of 1884 directed the Secretary of the Interior to provide, “Without regard to race,” education for children in Alaska. With generosity that would embarrass Scrooge, Congress appropriated $25,000 to the task. Four years later the federal Bureau of Education was delegated the responsibility of overseeing schools in Alaska.

By 1892, Alaska boasted 17 government-supported schools, while Protestant and Catholic churches offered another 14 schools. The Russian Orthodox Church provided more than 40 schools at that time, and had the only schools on the Kenai Peninsula.

The population of Alaska doubled between 1890 and 1900. This led Congress to adopt a Civil Code for Alaska in 1900. It provided any community with 300 residents authority to establish a seven-member city council and a three-member school board. It also provided a funding mechanism through business licenses, which were then made available to cities.

Miners at Hope opened the first American school on the Kenai Peninsula in January 1903. That fall another school opened in Seward, where railroad construction had flooded the town with new residents.

These schools were organized and funded by their communities. A year later those communities applied to the Bureau of Education and were accepted as part of the federal system.

In 1905, Congress acted on behalf of rural areas and passed the Nelson Act. It created the Alaska Fund, so that unincorporated areas, like cities, could gain capital through business licenses from establishments operating within a designated unincorporated area, yet outside the bounds of an incorporated city. Seventy percent of the Alaska Fund was dedicated to roads, 25 percent to schools and 5 percent toward care for the insane. Unincorporated areas could petition the nearest court clerk and form a school district. If approved, an election would be held to choose three school board members.

Nelson Act schools, however, were “devoted to the education of white children and children of mixed blood who lead a civilized life.” Schools for Native children were provided by appropriations from Congress, and they were still under the federal Bureau of Education.

Thus, in 1905, Alaska started a dual system of education. One for white and mixed-race children, which was controlled by local school boards and funded by Alaska businesses, and one for Alaska Natives, controlled by the federal Bureau of Education and funded by appropriations from Congress.

The early 1900s was a time of rapid school growth. Thirty-seven school buildings were erected between 1907 and 1909. In 1907, a 56-by-22-foot, one-and-a-half-story frame schoolhouse was built in Kenai. Most of these schoolhouses built in rural communities were constructed with material shipped from Seattle. The workforce tended to be Native carpenters under direction of a white supervisor. The Kenai

schoolhouse cost $5,500 to build, and of the 62 schools mentioned in the 1909 Annual Report on Education in Alaska, the Kenai schoolhouse was the second most expensive. Also in 1907, a building of the same dimensions was erected in Seldovia, for $4,980.

The teacher at the Kenai school was 32-year-old Arch R. Law. He was single and apparently a graduate of Park College in Missouri. College education was desired in hiring Alaska teachers, and by 1909 about 63 percent of the teachers had some college training.

Students and staff of Tatitlek School are pictured in March 1910. The teacher, pictured at center, is likely Arch R. Law, the first teacher at the American Territorial School in Kenai. Law only taught in Kenai the first year the school was in operation, in 1909, before moving on.

Law left after teaching in Kenai only one year, but can be seen in the 1910 census teaching in Tatitlek, near Valdez. A year later he married an 18-year-old girl in Arkansas.

In 1907-08 there were 34 students enrolled at the Kenai school with an average daily attendance of 27. The 1910 Census lists 37 children in school and an additional 20 school-age children “at home.” Some of the latter group was 16-year-old girls who, by that age, were married. The census shows that every student and the mother of every student was born in Alaska. Only four of the 37 students had fathers born outside of Alaska. Therefore, the first English school in Kenai was for Native children. Later, these schools were known as Bureau of Indian Affairs schools.

In educating Natives, the government was actually trying to assimilate Natives into white society. That is borne out by the 1909 Annual Report: “The education of the natives of Alaska is conceived as meaning their advancement in civilization. Superintendents, teachers, physicians and teachers of hygiene … are instructed to regard themselves as social workers and to lay hold of every opportunity of assisting the development of the natives.”

The report goes on to say, “In their capacity as social workers the 89 teachers in the Alaska school service made 11,540 visits to the houses of the natives, and received 28,583 visitors after school hours, making averages for each teacher of 130 visits made and 321 visitors received during the year. During the absence of physicians, 77 of these teachers rendered medical assistance 9,107 times.”

Many of the names of students from the 1910 census can be tied through genealogy to families living now or recently on the Kenai Peninsula. Paul Shadura, 7, was the son of the elder Paul Shadura, the Russian Orthodox priest for Kenai. That 7-year-old boy of 1910 has two brothers still alive, 94-year-old Isaac Shadura, of Kasilof, and 102-year-old Pete Shadura, of Arizona.

Glenn Kooley, of Soldotna, is another nephew of Kalie and James Wilson, and Mildred Schmari, of Wasilla, is their niece. Charlotte Korpinen, of Kenai, and Leona Blohm, of Michigan, are also nieces. No doubt there are many more.

Brent Johnson, of Clam Gulch, is a former president of the Kenai Peninsula Historical Association.