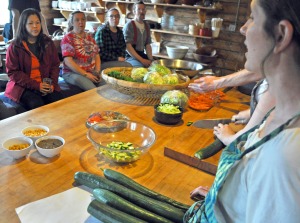 Photo by Joseph Robertia, Redoubt Reporter. Ionia elder Eliza Eller provides instruction during a cooking class that was part of Healing Our Future, a workshop to exchange ideas revolving around diet and health.

Obesity, diabetes and digestive issues are few of the numerous maladies that can result from dietary habits, and in Alaska, perhaps no cultural group is more susceptible than Natives.

“Now in the grocery stores, there are potato chips, Coca-Cola, alcohol. It’s not at all like the foods from the world they’ve come from,” said Barry Creighton, who serves on the board of directors for Alaska Mental Health and Peninsula Community Health Services.

Creighton also is an elder member of Ionia, a Kasilof community where members live by a different structure and sense of time than mainstream Americans, with a macrobiotic diet being a cornerstone of their approach. Ionia partnered with the Alaska Sobriety Movement to offer a Healing Our Future three-day workshop over the weekend to exchange ideas relating to diet as a cornerstone of health.

“A lot of what we do has resonance with the Native world,” Creighton said, explaining a little about the Ionia lifestyle. Members begin their day by sitting in a circle, with all ages talking to each other, sometimes for more than two hours.

“No subject is too mundane,” Creighton said. After 30 years of these daily, group-therapy-type meetings and sustained participation with the Alaska behavioral health system, Ionians have developed ways to address numerous forms of mental health illness as a community, he said.

Ionians also operate on a different perception of time. There are no clocks in Ionia, and members don’t feel compelled to adhere to strict schedules.

“I’ll talk to someone for 24 hours if they need it,” Creighton said.

“For some people, it’d be easier to change their religion than change how they eat,” Creighton said.

Barrels hold natural food stores at the therapeutic community of Ionia in Kasilof.

The workshop explained the macrobiotic diet, teaching people not just how to eat differently, but how to harvest, cook and preserve these food items.

“Our whole way of life is based on whole, natural foods,” said Ionia elder Eliza Eller.

Throughout the weekend, the 17 workshop members watched or helped in the preparation of meals built around whole grains such as brown rice, millet, barley, buckwheat and quinoa. They also learned the importance of using these items to create other products, such as whole-wheat breads, pastas and couscous.

They also utilize many raw vegetables and greens, homemade tofu, mineral-rich seaweed and various pickled and fermented foods used for the beneficial microorganisms found in these foods as much as their taste.

“We try to grow as much as we can, utilizing high tunnels to extend the growing season to October or even November, then we’ll pick berries, store root crops and pickle vegetables for winter,” Eller said.

What they can’t produce themselves, such as most grains, they try to get from other areas of Alaska. And what they can’t get in Alaska — primarily rice — they bring in from Outside.

Eller said that, while she believes this diet works for her and other Ionians, they know in terms of Alaska Native diets, avoiding animal products is likely not an option.

“I’ve met people who told me salmon is practically in their genetics, so understanding people’s backgrounds is important,” she said.

“We also acknowledged that there is no going backwards, and we’re not advocating that. We’re looking to the future where diets can be based on more and more whole grains every year, more wild food and food from small farms, and more knowledge and subsistence harvesting of wild plants,” Eller said.

Not just what people eat, but why they eat is an important concept, Eller said. Most people don’t eat just for sustenance.

“We eat for comfort, out of habit, out of boredom and out of addiction to sugars. I consider myself a recovering sugar addict, and I still crave chocolate bars from time to time. But acknowledging that you’re in that state is the first step, then monitoring it, then taking charge of it,” she said.

Martha Ramoth, of Kenai and of Native descent, said she decided to attend the workshop after hearing about it while taking related classes at the Dena’ina Wellness Center.

“My family has a history of autoimmune disorders, osteoarthritis, celiac, asthma and other food sensitivities,” she said.

She’s given up gluten and sugar in the past, but came to the workshop hoping to glean more information about eating better.

“I want to learn to eat healthy for myself and my family. I’m trying to learn as much as I can to be proactive with my health, rather than just depending on medication,” she said.

Creighton said that having so many Natives attend the workshop was a mutually symbiotic relationship for the Ionians.

“We get the exchange from meeting people who have lived for 6,000 years how we are living now. We’ve only done this for 30 years. We’re very young to it, still in the crawling stage,” he said. “But at least we’re crawling in the right direction.”