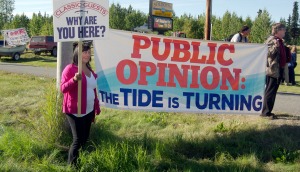 Photos by Jenny Neyman, Redoubt Reporter Demonstrators protesting the Kenai River Sportfishing Association met outside the Soldotna Sports Complex on Thursday evening while participants of the Kenai River Classic held a banquet inside. Protesters also floated with signs outside the riverfront home of founding KRSA member Bob Penney during another Classic event Aug. 19.

The hundred or so people holding signs outside the Soldotna Sports Complex on Thursday afternoon were demonstrating their opposition to the Kenai River Sportfishing Association, which was holding a banquet inside as part of its annual Kenai River Classic fundraiser. But their message wasn’t directed at KRSA. Neither were the similar signs displayed by eight boats and a kayak in front of the riverside home of KRSA founding member Bob Penney on Wednesday evening during another Classic event.

They hoped to reach community members — there were some honks and waves as cars drove by — who might not give fish politics much thought unless an issue is jumping up and wriggling in their face. And they particularly wanted to reach KRSA’s guests — the business executives, industry representatives, politicians and others who come to fish in the Classic and support KRSA with their donations.

“Awareness in our community,” said Dave Athons, a retired Alaska Department of Fish and Game biologist and board member of the Kenai Area Fisherman’s Coalition — which organized the demonstration — regarding the purpose of the protest. “And what we would really like to do is have some of the folks that attend the Classic open their eyes and see that the community does not support this organization, and some of the signs point to that. So we would hope that they would question, ‘Why are we spending our money here if we’re really not doing what we think we’re spending our money to do?’”

Participants included private sport anglers, personal-use fishermen and some who don’t even fish much at all. No sportfishing guides were in attendance. Most of the participants had a commercial fishing interest.

“There’s no doubt about it there’s a fair number of commercial fishermen here. It may be the majority. But the Kenai Area Fisherman’s Coalition has no commercial fishermen on their board of directors and they organized this, so they’re getting support from a broad spectrum of people,” said Ken Tarbox, also a retired Fish and Game biologist.

Megan Smith is all of the above.

“We ice fish in the winter and we fish on the river in the fall and we set net during the summer, so I’m just like every other Kenai resident. You’ll find me behind a dip net every once in a while, too,” she said. “I’m a Kenai resident, and I feel like Kenai River Sportfish isn’t a good neighbor. And I feel like, as a Kenai resident, my voice is being drowned out by people who yell a lot louder and have a lot more money than I do.”

Demonstrators’ signs ranged from the obvious — Kenai River Sportfishing Association with a circle and over it — to more nuanced, the variety of messages speaking to the multiple complaints that motivated demonstrators to participate.

“Support Diverse Fisheries” and “We Support Our Set-Netters” references a ballot initiative to ban set nets in urban parts of Alaska — which primarily would gut commercial fishing in Cook Inlet, where there were over 730 active set-net permits in 2015.

“I like to support the diversity of fisheries, I think that’s a real good slogan. I don’t think KRSA represents me or a lot of people on the peninsula,” said Bruce Vadla, a private sport angler. “I’m totally against shutting down the set-netters just for an allocation issue.”

“No Ballot Box Biology,” “How Many Votes Did You Buy Today,” and “Where have all the big kings gone? KRSA — Taking Care of Our River Just Like They Took Care of Robert Ruffner,” alludes to the charge that KRSA wields inappropriate influence in fisheries management in the state. Specifically, that the hundreds of thousands of dollars the organization spends on what KRSA terms “education” in its tax returns really amounts to lobbying, and that KRSA supports what’s good for the sportfishing industry first, before what’s best for ecology.

“I think that fisheries should be managed biologically instead of politically. I understand there are allocation issues involved with that but it seems like the politics are trumping the biology, and that’s why I’m here,” said Brian Gabriel, a commercial set-netter and personal-use dip-netter. “I think there are people who attend this Classic that maybe don’t understand some of the nuances that are happening with the management of the fishery. So I think this at least puts this on their radar that, hey, there might be something a little bit off here.”

Many user groups have wanted the Board of Fish to hold its Cook Inlet meetings on the Kenai Peninsula, where the bulk of the region’s fisheries occur. KRSA opposed that request, questioning whether Soldotna would be a safe location and whether it was fair to hold meetings away from Anchorage and Matanuska-Susitna Borough residents. Meanwhile, KRSA budgets staff time and travel expenses to attend Board of Fish meetings anywhere in the state. Both Tarbox and Athons said that, in their time with Fish and Game and since, they’ve never seen another organization with the kind of clout KRSA has in the management process.

“Kenai River Sportfish Association goes to almost every Board of Fish meeting, so they’re wielding influence and favors during that whole two-year process before Cook Inlet meets again,” Tarbox said.

The latest iteration of that complaint is KRSA opposing the appointment of Robert Ruffner to the Board of Fisheries. Ruffner was the longtime executive director of the Kenai Watershed Forum and was widely heralded, particularly on the peninsula, as someone who would put fish first. The Legislature did not confirm his appointment to the board.

“I think the belly of the beast was exposed on the unethical practices that Kenai River Sportfishing does,” Tarbox said. “It was just so blatantly wrong as to what happened to Robert that the community responded and people said, ‘We can’t take this anymore.’”

“Our primary goal at KRSA is conservation of salmon habitat while promoting responsible sportfishing on the Kenai River. The Classic brings awareness that the Kenai River matters. The event provides an educational opportunity to attendees on a wide range of issues, including habitat conservation, fisheries management, research and stewardship of this great resource. The Kenai supports the state’s largest sport and personal-use fisheries — great angler access and fishing opportunities make it one of the great sportfishing rivers in the world. Yet the Kenai River also is one of the great conservation success stories anywhere in the world in that there has been more investment in habitat conservation to protect riparian fish habitat and restore fish passage, more areas closed to bank fishing, and more habitat-friendly angler access infrastructure than any other location in Alaska. (On Wednesday) at the Kenai River Classic Roundtable, we had national and state experts discuss current hurdles and opportunities facing the sportfishing industry and offered their views on long-term plans to confront the challenges while supporting the opportunities that exist.”

Athons questions KRSA labeling itself a conservation organization. For instance, what has it done to protect big kings in the Kenai, Athons said, the returns of which have been in decline, particularly in the early run?

Public access to KRSA’s financial picture is limited to its 501c3 nonprofit organization tax filings. But in some of those returns, the Classic appears to cost about as much to put on as the fundraiser generates, Athons said, so where’s the money for protecting habitat?

Gease could tick off several KRSA-funded projects to improve or protect habitat, such as installing elevated fishing platforms and doing bank restoration work. 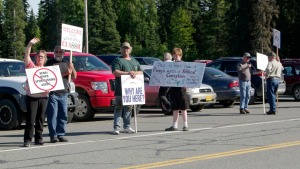 “For example, on Slikok Creek, KRSA cooperated with (the Kenai Watershed Forum) on a culvert-replacement and fish-passage research project that showed definitively that perched culverts block both adult and juvenile salmon passage,” Gease wrote in an email.

On the topic of Slikok, Gease further wrote that radio telemetry studies done by the U.S. Fish and Wildlife Service in 1979-’81 showed low levels of kings in Slikok back then, and that surveys done by Fish and Game show Slikok doesn’t have great habitat for king salmon.

“Most importantly, those foot surveys in the 1990s indicated that many of the kings in Slikok Creek during that time lacked an adipose fin or had coded wire tags, which means these fish were strayed hatchery fish from the Kasilof/Crooked Creek or Ninilchik hatchery programs,” Gease wrote.

The hatchery program changed to better imprint fish in Crooked Creek, thus reducing the number of strays in the Kenai, Gease continued.

To turn the tables, “KAFC does not raise funds for charitable or conservation purposes,” Gease wrote. “Raising funds for conservation has been a hallmark of sportsmen’s groups across Alaska and the rest of the country for many generations. I do not know of a fish habitat or fishery conservation project that KAFC has raised either the matching or full funding for.”

Tarbox would take that table for another turn.

“It’s not the measure of good that they do when you evaluate an organization, it’s the measure of harm that they do in terms of balance. And nobody’s going to question that on some of their projects, they’ve been good. But on balance, overall, it hasn’t been in the positive, it’s been in a negative,” he said. “Nobody’s going to argue that any organization with millions of dollars can do good, it’s the balance overall as to how they get there.

“They tend to cross that ethical line, and they don’t do it just once, they do it multiple times,” Tarbox said. “If they weren’t doing that then more power to them, because that requires them to build a coalition that supports their objectives in an ethical way.” 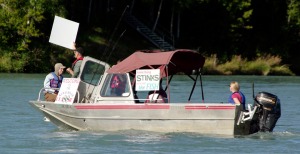 Athons said he hopes other fishing and ecology-minded groups take up the issue and continue to protest KRSA, and that the community at large gets behind the message, as well. Demonstration organizers pointed out that the Soldotna Chamber of Commerce removed KRSA as a community partner, the local Boys and Girls Club no longer participates in KRSA’s activities, and Kenai Peninsula Borough Assembly members spoke disparagingly about KRSA’s opposition to Ruffner’s appointment and holding Board of Fish meetings on the peninsula.

“People are realizing that KRSA has way too much power,” Athons said. “This organization has corralled the board process, has a cozy relationship with the department, and now they’re ignoring our community and creating divisiveness.”

As for creating divisiveness, Gease points out that his group isn’t the one out waving protest signs.

“At KRSA we believe in process over protest, science over scare tactics, and education over agendas,” he wrote. “We believe fish come first and are the infrastructure of healthy fisheries.”