If Trail Lakes Hatchery in Moose Pass were a motel, the sign out front would be proclaiming vacancies. Though the reason why it’s so empty would probably strike prospective lodgers as being a little too like Alfred Hitchcock’s Bates Motel, since the last batch of fish staying there met an untimely demise.

IHN isn’t a new phenomenon, and this outbreak isn’t the worst the hatchery has seen, but it comes at a particularly bad time for the Cook Inlet Aquaculture Association, which operates the state-owned hatchery through contract with the Alaska Department of Fish and Game. At a recent meeting, the CIAA board of directors voted to keep the hatchery open for the time being, but just like the fry, the hatchery itself may soon be facing execution.

“I think everyone is going to wait and see before they put the kibosh on the program. We have basically a year and three-quarters to ponder what we’re going to do, if the program’s going to go forward and in what form,” said Tom Prochazka, Trail Lakes Hatchery manager. END_OF_DOCUMENT_TOKEN_TO_BE_REPLACED 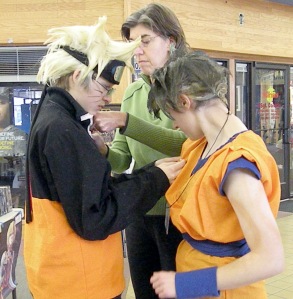 Photos by Jenny Neyman, Redoubt Reporter. Jean Kudyba attaches a pin onto the costume of her daughter, Madeline, while Madeline attaches a pin to sister, Anne, at an anime convention.

The Peninsula Center Mall in Soldotna was the site of an elaborate invasion Saturday. Storm Troopers, ninjas and cardboard ax-wielding warriors roamed the common areas, ate burgers at Ginger’s restaurant and browsed in stores, peppered with Japanese schoolgirls toting “Pokemon” creatures, a white-faced geisha and a rainbow-hued troupe of dance girls, each in ribbon-draped, monochromatic dresses with Day-Glo hair in matching shades.

Though not yet October, it looked as though Halloween had broken out early. In a way it had, since many of Saturday’s mall visitors were in costume. But it wasn’t costumes for the sake of trick-or-treating, it was costumes to pay homage to favorite characters, styles or genres of one of their favorite pastimes — anime.

The mall was the site of the Kenai Peninsula Anime Convention, the first held on the peninsula, according to organizer Josh Rutten, who attends Kenai Peninsula College with the intention of being an anime voice actor himself one day. Anime, broadly, is Japanese animation, and refers to the animated TV shows produced in that style, including the widely popular “Dragon Ball Z,” “Naruto,” and “Pokemon.” But the genre’s umbrella encompasses much more than just that, including comic books — called manga — video games, role-playing games and an entire style of artwork, with the characteristic large eyes; lean, angular features; and, typically, bright colors used in anime.

Though originating in Japan, anime and its associated forms of entertainment are a worldwide cultural phenomenon. Saturday’s convention, which drew a respectable-sized crowd of central peninsula fans and visitors from Anchorage and beyond, mostly in the middle-school through college-age demographic, showed the anime revolution has firmly planted roots in Alaska.

“We’re just here to have fun, just to show that we like anime and to show people around the peninsula that there’s a group of people that like anime,” Rutten said. END_OF_DOCUMENT_TOKEN_TO_BE_REPLACED

Photos by Joseph Robertia, Redoubt Reporter. A wolf with an obviously full belly carries away a Dall sheep leg to snack on later, or perhaps to feed young pups. While wolves are a rare sight, even in Denali National Park and Preserve, several were spotted by winners of the fall road lottery, to spend a day driving the park road in a private vehicle.

Even without the Dall sheep’s hind leg locked in its jaws, it was clear from the tight and heavily distended stomach that the wolf had just gorged on a fresh meal. It was a healthy-looking animal, with a light gray to nearly white coat.

The wolf trotted by quickly, only stopping occasionally to mark its territory as it went. It was not dissuaded in the least by the dozens of vehicles parked just yards away, all filled with camera-carrying spectators click, click, clicking away to photographically preserve this rare sight.

“Looking at the pictures, I still can’t believe I was there,” said Mindee Morning, of Soldotna, who, accompanied by her husband and two friends, saw wolves and numerous other wildlife species in the 6-million-acre Denali National Park and Preserve earlier this month after being picked as one of the park’s “road lottery” winners.

Each September the park hosts the four-day event in which 1,600 lottery-drawing winners are given a single, daylong permit, allowing them to drive as much of the 92-mile Denali Park Road as weather allows.

This year’s lottery dates were Sept. 17 to Sept. 20. Each day 400 winners, who had applied online for a $10 fee, were allocated to one of the four days after their names were picked randomly by a computer.

“This was my first time trying for the lottery and my first time getting it,” Morning said. “I put in for it because I run sled dogs and I’m planning a trip with them through the park this winter, so I wanted to go up and scout it out.” END_OF_DOCUMENT_TOKEN_TO_BE_REPLACED

Like many Alaska adventures, my trip to Denali began with a friend of a friend.

This person, while lucky enough to be drawn as a winner of the park’s “road lottery,” was at the same time unfortunate in having an illness befall a family member. Not able to go north, he gave his permit into the park and preserve to a buddy of mine, who then invited my wife and I, knowing we have a love for wildlands and wildlife.

The park opened to lottery winners at 6 a.m. We were there at 6:01 a.m. Once we had checked in, we started the drive on the park road. In less than two minutes we had our first wildlife encounter. While still dark out, we came upon a large, long-legged lynx sashaying down the road. Like others I had seen on Skilak Lake Loop Road back on the Kenai Peninsula, this normally elusive cat had grown so accustomed to seeing vehicles, it barely batted an eye at us.

A few miles farther in we saw an icon of the north — a bull moose with a full rack, each palm of which was the size of a compact car’s side door. The sun was still below the horizon, but there was already enough light in the sky to see he was just a few paces behind a cow that seemed half his size. Even in the faint light we could hear the big male grunting in the ungulate equivalent of foreplay. We didn’t want to interrupt their nuptials so we pressed on.

Mile after mile we spotted several species of wildlife. In Polychrome Pass we saw the ever-present Dall sheep clinging to the rugged vertical slopes. Not far from the Toklat River we witnessed a grizzly sow and her two cubs crossing the road in front of us. With coats thick and luxurious, and bodies fat and round, they looked ready for their long winter slumber. END_OF_DOCUMENT_TOKEN_TO_BE_REPLACED 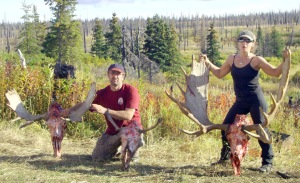 Photo courtesy of Taylor Cunningham. Mike Stacy and Stacy Whiteley display the three racks of the bulls they harvested.

Many hunters consider themselves fortunate if they bring down one bull moose over the course of the hunting season, so Soldotna hunter Mike Stacy and his hunting partners are justifiably pleased with their take earlier this month in the Caribou Hills — bagging three bulls in 10 minutes.

“We were definitely in the right place at the right time,” he said. “And now our freezers are full for another season.”

Stacy, joined by Stacy Whiteley, his girlfriend of several years, and Whiteley’s 18-year-old son, Taylor Cunningham, rode horses far into the hills to a spot Stacy has used as a hunting base camp for years. The area, on the Kenai National Wildlife Refuge, is a spot where Stacy has typically found the moose to be many and hunters few and far between due to the logistics of getting in and out without a motorized vehicle.

“In 11 seasons of hunting, I’ve taken 11 moose. Four came out of this same area two years ago, and three came out last year,” he said. “But three legal bulls in 10 minutes, this is the first time that’s ever happened.” END_OF_DOCUMENT_TOKEN_TO_BE_REPLACED

By Andy Veh, for the Redoubt Reporter

Compared to September, the sky shifted somewhat toward the east with Bootes setting in the northeast. Its brightest star, Arcturus, can be seen in the early evening on the northeastern horizon. Prominent constellations and stars are the Big Dipper low and the Little Dipper high in the north, Cygnus with Deneb, Lyra with Vega and Aquila with Altair still high in the west. These three stars form the summer triangle. It’s perhaps comforting that, in Alaska, we can see this summer triangle all winter long, albeit on the horizon.

Cassiopeia appears overhead, in the zenith, and Pegasus’ square/diamond is right above the very bright Jupiter in the south. In the east, Orion rises with Betelgeuse and Rigel, following Taurus with Aldebaran and the Pleiades star cluster.

Aside from Jupiter, which can be seen all evening, Uranus appears close to the biggest planet, while Neptune can be seen for most of the evening. The latter two can be found with strong and stable binoculars. Try Googling “Uranus Neptune 2010 -astrology” for good sky charts (the minus hopefully eliminates misleading astrology websites).

The other planets — Mercury, Saturn, Venus and Mars — all set and rise together with the sun in Alaska and thus cannot be seen.

I thought I would try something different this month and present a surprise quiz that I hand out early on in class to astronomy students. It is based on trying to eradicate common misconceptions. Here is the first half (the second will follow in a future column): END_OF_DOCUMENT_TOKEN_TO_BE_REPLACED

Editor’s note: This is the second part of a three-part series of articles about some of the histories that have been written concerning the people and places of the Kenai Peninsula. Part one appeared last week. Part three, which will focus on rarities and oddities in peninsula historical writings, will appear next week.

When Andrew Berg died of heart failure in an Anchorage hospital in early 1939, his 69 years of life were memorialized in an obituary in the Anchorage Daily Times:

“Of Finnish extraction, Mr. Berg was known in his heyday as the most powerful man of the Kenai country. He was six feet two inches tall and weighed 235 pounds. He out-traveled all others in speed and distance. As a trapper, he built 14 cabins…. Mr. Berg served as guide for many parties and hunted for museums…. The veteran Tustumena resident was the first game warden of that district and also served as fish warden for some time…. Mr. Berg’s name appears often in the Remington tabulations of record trophies, both as hunter and guide.”

Dubbed the “dean of guides in Alaska,” Berg lived a remarkable life, the last 49 years of which he spent in and around Tustumena Lake. A detailed, photograph-filled history of his life can be found in the pages of “Alaska’s No. 1 Guide: The History and Journals of Andrew Berg, 1869-1939.” Thoroughly written and painstakingly researched by Catherine Cassidy and Gary Titus, this book is an open window to a more rugged and wild Kenai Peninsula that existed in the first half of the 20th century.

Other books that open up the sweep of peninsula history to interested readers include: END_OF_DOCUMENT_TOKEN_TO_BE_REPLACED