Feeding into sympathies — Some moose ‘help’ does more harm than good 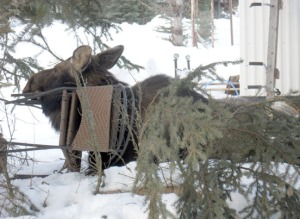 Photo courtesy of Brandi Ivy. Fish and Game was called to attend to a cow moose in Kenai on Feb. 22 that had gotten patio chairs stuck on her head.

Alaska Department of Fish and Game personnel have many tools and techniques available to deal with wildlife problems, but bridging the human-animal conversation barrier isn’t one of them. That’s proving particularly unfortunate in recent weeks on the central Kenai Peninsula, as deep snows and scant available browse are putting hungry moose increasingly in contact with people.

“Sometimes you wish you could do the ‘Dr. Doolittle’ thing and just explain things to them,” said Larry Lewis, wildlife technician for Fish and Game. “These animals, moose, are nothing to trifle with. It just floors me whenever I see a picture of somebody hand-feeding one, or getting to close to them. They need to be respected for the size and capabilities they have.”

If he could, Lewis would explain to moose being fed by well-meaning people that they shouldn’t associate humans with free meals. Or when he has to go deal with the repercussions of those associations, that he could just tell the moose he’s called out to disentangle, haze off or worse, that he’s doing it for their own good. Instead, he does what situations warrant with the moose, and attempts explanations with the people.

“It’s clearly, by regulation, illegal to intentionally feed a moose or to negligently feed a moose. You have to take that in the context of the meaning behind the regulation, which was for the purposes of public safety and the health of that animal,” Lewis said. END_OF_DOCUMENT_TOKEN_TO_BE_REPLACED

Photos by Joseph Robertia, Redoubt Reporter. Kasilof musher Paul Gebhardt takes a training run with a massive team in preparation for the Iditarod. Training with a race team of 12 to 16 dogs is the norm, whereas Gebhardt ran with 26- to 28-dog teams to get them in shape for the race.

Last year’s Iditarod Trail Sled Dog Race stood as an anomaly of sorts. For the first time since 1988 there were no Kenai Peninsula mushers in the top 10, but according to the large contingent of mushers signed up this season, that won’t be the case again.

“There are a lot of good teams coming up, so I’d say the competition from this area will be stronger than ever before,” said Kasilof musher Paul Gebhardt, a 15-time veteran of the Last Great Race who has twice finished as high as second place.

In addition to Gebhardt, other peninsula entrants this year include Anna and Kristy Berington, Bruce Linton and Colleen Robertia, all of Kasilof, as well as Dan Seavey Sr. from Seward and Mitch Seavey from Sterling. Mushers will leave the ceremonial start in downtown Anchorage on Saturday, and hit the trail for real at the restart in Willow on Sunday.

Like 2004 champion Mitch Seavey, who was withdrawn from the Iditarod last year after a knife accidentally closed on his hand and nearly cut off several fingers, Gebhardt also pulled out early, but as a result of dwindling dog numbers.

“Last year I had a hell of a team, but the circumstances were I went home early. But this year I’m planning on being back in the top 10 again and hopefully will win,” he said. END_OF_DOCUMENT_TOKEN_TO_BE_REPLACED 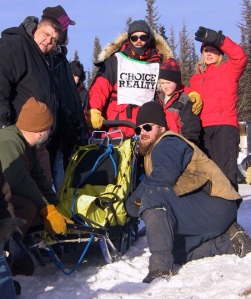 Photo by Joseph Robertia. Mitch Seavey prepares to leave the starting line of the Tustumena 200 several years ago. Seavey is an annaul Iditarod contender, joined this year by his father, Dan Sr, and Dallas, one of his sons.

In the world of mushing, few families can claim as many Iditarod accomplishments as the Seavey clan. The now 74-year-old Dan Seavey Sr., of Seward, helped organize the first Iditarod back in 1973. He ran the race in its inaugural and second years, took a hiatus, returned in 1997 and 2001, and is back again for the 2012 race.

His son, Mitch, of Sterling, won the Iditarod in 2004 and has also earned nine top-10 finishes out of 18 attempts at the race. Mitch’s son, Dallas, formerly of Sterling, has run the Iditarod five times, placing in the top 10 the last three years, including a career-best fourth-place finish in the 2011 Last Great Race, which came just weeks after Dallas won the 1,000-mile Yukon Quest International Sled Dog Race.

Mitch’s other sons, Tyrell and Danny, have also both completed the Iditarod, as well as his daughter-in-law, Jen, who is Dallas’ wife. Mitch’s youngest son, Conway, ran the Jr. Iditarod in 2011, won the Jr. T in January, and has been cited on several occasions as stating he intends to run the Iditarod when he turns 18.

“We joke about it all the time. We wonder how different things would be if instead of getting those first sled dogs I’d gotten into stamp collecting,” Dan Seavey said. “But, I didn’t, and sled dogs have just always been a part of us Seaveys. They’ve just always been.”

“Not since 2001, when Mitch, Danny and I ran it, have three generations of Seaveys been out there, so that is very meaningful to me. But I’m also being sponsored by the Iditarod National Historic Trail Alliance to highlight and educate people about the four decades of the Iditarod race and 100 years of the trail,” he said.

He’ll be educating villagers along the way about the important role their communities have played in the history of the race and trail. That will hamper any attempt at keeping a race pace, but Dan said he doesn’t intend to lollygag.

“It’s a wonderful opportunity, so I intend to do as good a job as I can, and I have no doubts I’ll make it to Nome. I feel better now than I did in ’97. I’ve been blessed with good health, so it’s not like I’ll have a whip sled of pills behind me, and while I haven’t raced in a while, I’ve mushed recreationally every year. I’m always out there, so it’s not like I’ve forgotten what end of the dog the harness goes on or anything,” Dan said.

“There’ve been a lot of advancements over the years, though. In ’97 I was a week faster than my first race, but I placed 30 positions further back, and I’m expecting more of the same this year. My only goal is to make it by the banquet because I don’t like cold food,” he said. END_OF_DOCUMENT_TOKEN_TO_BE_REPLACED

Watchdog efforts by the Alliance for Concerned Taxpayers sharpened their teeth this week in a new public information project aimed at informing the public on government spending.

ACT mailed out a list of agenda items introduced at the Feb. 21 Kenai Peninsula Borough Assembly meeting. Beside each ordinance was a label of either “controversial” or “off-budget” or both. ACT will then keep tabs on the voting record for each assembly member, said ACT’s Mike McBride.

Off-budget items are spending requests made after the fiscal year’s budget was already passed. So far, the borough has spent $500,000 in this category, according to ACT’s research surveying allocations since July 1, 2011.

“We want to make people aware ahead of time what off-budget items are being considered,” McBride said. “This is new. We started working on it in December, and all of our information will be sent out by email, (announcing) notice for issues up for public hearing. These are issues that have not been voted on yet. Then, once voted on by the assembly, it will be posted on our website (www.act-kpb.org).” END_OF_DOCUMENT_TOKEN_TO_BE_REPLACED

Editor’s note: This is the sixth and final article in a multipart story about the origin of the Borough Administration Building in Soldotna. This week’s installment reveals how the completion of the administration building was no easy feat.

The good start to the construction of the Borough Administration Building lasted only a few weeks. Then disaster struck. On Nov. 29, 1969 — with the work estimated to be approximately 35 percent complete — a dire headline appeared on Page 1 of the Cheechako News: “Borough Building Panels Lost in Storm at Sea.”

A few days earlier, according to the article, the tugboat Patricia Foss, owned by Seattle-based Foss Tug and Barge Company, had pulled into the dock at the Ketchikan Pulp Company after its barge, No. 250, had hit bad seas about 40 miles north of Ketchikan. Foss officials announced that two-thirds of a shipment of prefabricated concrete panels designated for the borough construction project had been on board, and that storm waters had cleared the decks of most of the cargo and damaged much of the remainder.

Borough construction coord-inator Don Gallagher said that the borough had “suffered a major setback in its building program.” Gallagher said that each of the steel-reinforced concrete panels weighed 8 to 12 tons and had been shipped out of Tacoma, Wash.

Originally, the panels had been due on the Kenai Peninsula on Nov. 20, but bad weather had caused delays. Now the delay would be more substantial:

“I presume it will be necessary to contact the manufacturer of the panels and have the order re-poured,” Gallagher said. “This will probably mean a delay of three to four months in our building schedule.” END_OF_DOCUMENT_TOKEN_TO_BE_REPLACED

By Zirrus VanDevere, for the Redoubt Reporter

Susan Joy Share seems quite capable of sharing her joy through her meticulous, thoughtful and adventurous book creations. This is the kind of body of work with which I could spend a whole afternoon, delightfully coming across visual goodies I’d missed the first five times through. It is currently showing in the Gary L. Freeburg Gallery at the Kenai River Campus of Kenai Peninsula College.

It’s pretty much impossible to pick a favorite, and just when I think I have narrowed it down some, another wonderful element in another piece presents itself and I am pleasantly confounded. Share presents a nice mix of immaculate handling and Dadaist collage, so that the awe factor is met in regard to her great skill, yet we are also challenged by the images to think more deeply about the meanings inherent in the pieces. END_OF_DOCUMENT_TOKEN_TO_BE_REPLACED

Plugged In: Put ink to paper to produce quality prints

By Joe Kashi, for the Redoubt Reporter

Making top-quality photo prints takes some experience and knowledge but it’s a skill that’s within reach if you’re willing to make the effort and perhaps “waste” some paper and ink.

Of course, using high-end equipment reduces guesswork and unexpected print-to-print inconsistencies. But you’ll still need to know how to recognize a good print and understand how to correct a photo that’s not quite good enough.

This week, we’ll discuss the major variables affecting the final appearance of any photographic print and how to correct some common problems. Because this week’s article will be more technical than usual, we’ll do the easy ones first. Most of our points are equally applicable to both color and black-and-white images, with a fine print the ultimate aim.

Print resolution is expressed in dots per inch (dpi). A computer monitor usually has about 72 dpi, but the human eye is capable of seeing far finer detail. Try making a print at 72 dpi and you’ll see how bad it looks on paper, any paper. “Up-resing” to the desired print size at 450 dpi usually produces all of the image detail that the human eye can resolve. For reference, this newspaper prints at 220 dpi, and that’s noticeably lower in the fine detail that often makes or breaks a print. END_OF_DOCUMENT_TOKEN_TO_BE_REPLACED

Filed under photography, Plugged in