Editor’s note: This is part four in a series of stories examining J-1 student visa workers on the Kenai Peninsula.

Photos courtesy of Tom and Adelle Bearup. Linn, at left, and Isabell, at right, staying with Tom and Adelle Bearup, of Soldotna, have a glamor dress-up slumber party with friends Christine, Micki and Victoria this summer. Linn and Isabell worked at Taco Bell in Soldotna this summer, while their friends worked at Subway in Kenai. The girls, from China, had never had a dress-up party before.

Once parental protectiveness tendencies kick in, it’s hard to hold them back. That’s what several central Kenai Peninsula families have found as they stepped in to help international exchange youth in the U.S. for the summer on J-1 cultural exchange visas.

The college students pay thousands of dollars to exchange sponsor programs to spend three months working, traveling and experiencing American culture in the U.S. Instead of the life-enriching, educational and enjoyable experience they seek, they often find themselves adrift in the areas to which they are sent, challenged by language and cultural barriers, unused to the climate and way of life in communities much different than their homes, unprepared for the difficulties of living on minimum wages, and without much assistance from the exchange sponsor agencies that are paid to arrange the trips.

On the central Kenai Peninsula, students come from Turkey, Kazakhstan, China and elsewhere. They work at fish-processing plants and fast-food restaurants. And they have been taken in by local families who worry about the students’ well-being and the impression of the U.S. that the students may form.

“We’re Alaskans. We love people. We care about people. We want to reach out to them and want to help where we can. We want them to know American people are giving, loving people, and they open their homes and their hearts to people they don’t even know. We want them to see that,” said Tom Bearup, of Soldotna. END_OF_DOCUMENT_TOKEN_TO_BE_REPLACED

By JP Bennett, for the Redoubt Reporter

Photos courtesy of JP Bennett. Lily pads presented a not-too-serious impediment to navigation for Branden Bornemann, of the Kenai Watershed Forum, during a trip down Soldotna Creek recently.

By definition, adventure requires uncertainty and risk, but not every outdoor adventure has to begin with a capital A and end with an exclamation point.

Two weeks ago I tagged along with Branden Bornemann, an environmental specialist for the Kenai Watershed Forum, for a float down Soldotna Creek. The Watershed Forum was under contract with the Alaska Department of Fish and Game to do a preliminary assessment of the stream.

The data Bornemann began to collect will, among other things, be used to help 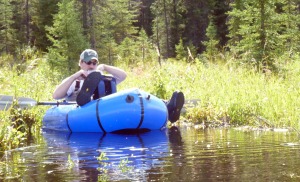 develop a plan to eradicate pike, an introduced species that is wreaking havoc with the native salmon on this tributary of the Kenai River. We planned to launch at Sevena Lake and go to some undetermined point near the Sterling Highway.

Our takeout point was only a temporary uncertainty; it was quickly resolved as we scouted several possibilities en route to the put-in. There were other things we could not be sure of until we set out. Would there be enough water flowing through the creek to render it floatable? Would the creek be choked with obstacles of logs and debris, thereby requiring work with a capital W and an exclamation point to portage the barriers? Would we be able to complete the trip in time for Bornemann to keep an evening rendezvous with a special friend?

Oh, there were some risks, too. We both brought along bear spray and kept it handy throughout the day. This is most definitely an anadromous stream, and where there are spawning salmon, there likely are predators.

OK, maybe there was only that one risk. The creek was so slow-moving that even the easiest Class I rating would overstate the possibility of danger. At most, we expected the water to be thigh deep on either of our 6-foot-plus frames. As our luck would have it, the sun was shining and there was just enough wind to keep pesky flying insects from being annoying.  END_OF_DOCUMENT_TOKEN_TO_BE_REPLACED

By Dr. David Wartinbee, for the Redoubt Reporter

Photos courtesy of Dr. David Wartinbee. Lichen growth in an alpine meadow appears light green against the darker green foliage. These lichen patches are food for caribou during the winter months.

Each fall we head out to some secret places to pick low-bush cranberries. They are actually lingonberries, but who cares when you are mixing that sweet sauce with your Thanksgiving turkey?

This weekend we spent several hours walking and crawling through moist hummocks of sphagnum that are laced with the tiny plants that produce the treasured berries. We picked a gallon of berries before midday and considered it a successful excursion. They will be washed and frozen until it’s time to make sauce or put them in various muffins.

While out harvesting, I kept finding something else to pick at my attention — various forms of lichens, and there seemed to be a new growth form just about every time I turned around.

I seem to have lichens on the brain lately. Last weekend I noticed many bright-orange lichens on rocks around Skilak Lake. Back a few weeks, I had been so taken by the diverse colors of lichens on rocks above tree line that I took pictures hoping to capture their beautiful patterns. And friends in Wasilla, who raise reindeer, just returned from a trip to collect lichens as a winter treat for their animals. END_OF_DOCUMENT_TOKEN_TO_BE_REPLACED

Filed under ecology, science of the seasons

From a Trail Called ‘Life’: Different paths to summer

By Dante Petri, for the Redoubt Reporter 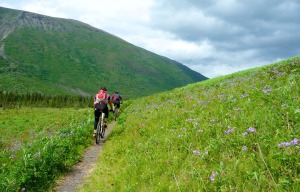 Photo courtesy of Dante Petri. Kjell Risung, left, of Kenai, and Brian Walsh, of Anchorage, ride through a blooming avalanche field along the Russian Lakes Trail in Cooper Landing this past June. Colorful summer scenes like this don't last long in Alaska, and are sometimes harder to catch than the salmon swimming in nearby rivers.

It’s been over three years since I last raced a mountain bike.

And three years later, with a heavier bike, possibly a slightly heavier body, and a whole heck of a lot less fitness than I had once, I finished the same way I did the last time I raced, in May 2008: Did not finish, though for very different reasons.

In three years it sure has felt like a long fall from the fall of 2007, when “Myrtle (the Broken Turtle),” my somewhat less-than-affectionate name for my not-always-so-trustworthy glory-hog bike, and I whizzed around the East Coast collegiate mountain bike race circuit picking up a few top-three placements and even a well-earned win. That was sort of a two-wheeled thesis defense at the time for my otherwise short-lived competitive cycling career.

It was a stinging sensation I felt in mid-August this summer, though, when a group of toothpick-thin, Spandex-clad bike racers from Los Anchorage smoked the heck out of me and my lungs right off the start on an afternoon race in a park just on the outskirts of the city.

This summer has been my first “real Alaska summer.” The word “real” is, of course, clutch in this phrase.  END_OF_DOCUMENT_TOKEN_TO_BE_REPLACED

Editor’s note: Details of the resolution to this 43-year-old story have not yet been unearthed by the Redoubt Reporter, but enough details of the actual event were available to provide for an entertaining narrative.

The union of the name “Ronald Louis Anthony” and the phrase “criminal mastermind” is unlikely. Anthony himself made certain of that in May 1968 when his own poor planning caused the initial good fortune of his criminal enterprise to rapidly run awry.

Anthony’s target was the cash available in Nikiski at the Mallard Park Branch of Alaska State Bank. It must have seemed like a reasonably easy target since it was located in a 12-by-60-foot trailer house in the Mallard Trailer Park about 9.5 miles north of Kenai.  (Work on the new building that would eventually house the Mallard Park Branch was slated to begin later that summer.)

Despite the seeming “sitting duck” nature of the bank branch, Mary Susan Roberts, who was interviewed by Alaska State Troopers shortly after the robbery, said that Anthony “seemed very nervous” during the process of his crime. It turns out that he had plenty of reasons to be on edge.

Wearing wraparound sun-glasses and white coveralls trimmed in red, Anthony drove a borrowed cream-colored Volkswagen Beetle to the trailer park. Inside the bank, according to archived documents released by the Alaska Department of Public Safety, he went immediately into action. (The date was May 23. The time was 1:45 p.m.)

“I noticed this man come in because he turned to me and asked if the manager was in because he wanted to cash a check,” Roberts said. “I said he didn’t need the manager, and then he pulled a revolver and said, ‘Give me all the money you’ve got.’ 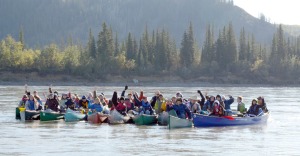 Photos courtesy of Pat Shields, Cook Inlet Academy. A group of Cook Inlet Academy junior-high students and chaperones wave from their canoe raft on the Yukon River during a field trip to study gold rush era history at the start of the school year.

Getting there, in this case, was not half the fun.

“It took for-ev-er,” said Madison Orth, one of the junior high students at Cook Inlet Academy that went on a nine-day field trip to the Yukon to study the gold rush era.

“It was the longest drive of your life,” said Reece O’Dell.

Though they would just as well forget the two-day drive from Soldotna to Dawson City, Yukon Territory, Canada, the rest of the trip proved a memorable educational experience that will stick with them for, like, ev-er.

“They get to put their hands on history,” said Pat Shields, the CIA teacher who organized the trip. He’s led three of these Yukon trips in his time at CIA. It’s become a junior high tradition at the school.

“They learn quite a bit about gold rush history in class, and this reinforced what the kids had already learned. Now anytime they read about it or talk about the Yukon River, they know what the Yukon River is — they’ve run it for three days. Or when they talk about the gold rush, they remember seeing a dredge and gold panning. People from the 2001 trip still talk about all the benefits of the trip and what they learned — the history of our country and our state.” END_OF_DOCUMENT_TOKEN_TO_BE_REPLACED

Photo courtesy of Cindy McKibben. A 3-D mural created by students is installed in the atrium of Mountain View Elementary School in Kenai.

Elementary school art projects often are about easy mediums and quick results — a la macaroni noodles glued to a piece of construction paper. Students at Mountain View Elementary took on a much larger project, that only now — two years later — has finally been completed and hung.

“It’s huge,” said Joy Falls, the artist who oversaw the project. “It’s about 3 feet tall by 51 feet long and it’s made of tiles, each made by an individual student. There are more than 500 tiles in all.”

Falls connected with the school as an Artist in Residence, a program offered by the Alaska State Council on the Arts. She has a master’s degree in fine arts from the University of Montana and has taught art classes at Kenai Peninsula College, but she said she is passionate about teaching children creative skills.

“It was a wonderful opportunity to have something permanent for these children,” she said. END_OF_DOCUMENT_TOKEN_TO_BE_REPLACED