By Bill Howell, for the Redoubt Reporter 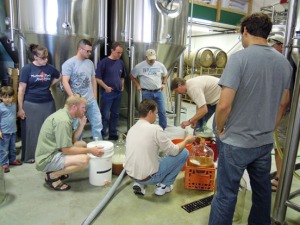 Photo courtesy of Elaine Howell. Brewers at King Street Brewing Co. fill up patrons’ containers with a batch of its India Pale Ale as part of a celebration of the brewery’s one-year anniversary.

Birthdays are funny things. When we are young, they are joyous occasions, marked by parties and gifts. When we reach middle age, we are often happy to just let them pass by unmarked, rather than be reminded that we’re a year older. Then, in our old age, birthdays become something to celebrate again, as each one marks another year we’ve held the Grim Reaper at bay.

When it comes to U.S. craft breweries, there are darn few out there that could qualify as middle-aged. Most are young adults, at best. Alaskan Brewing Company, the oldest craft brewery in Alaska, only turned 25 last December. Most craft breweries in this state are still just teenagers, at best, and some are fresh from the womb, like Seward Brewing Co., which opened its doors Aug. 17. So it makes sense that for these youngsters, birthdays are still something to celebrate.

King Street Brewing Co., at 7924 King St. in Anchorage, just celebrated its first anniversary, having brewed its first batch of Busted Blonde Ale on Aug. 23, 2011. Over the last year, this brewery has produced many exceptional beers, such as their King Street Pilsner and King Street Hefeweizen, and earned quite a following. Such a following, in fact, that they had ordered and just took delivery of two brand-new, 40-barrel conical fermentation tanks. To mark this double milestone, the folks at King Street offered several events.

On Aug. 24, the two new tanks were christened at a party at the brewery. Of course this could not be done with anything so mundane as a bottle of champagne. Instead, King Street smashed glass growlers filled with beer against the tanks, ensuring that they will serve the brewery productively for years to come.

On Aug. 25, King Street held a Barbecue and Free Wort Day. For those of you who are not brewers, wort is unfermented beer. Besides cooking up plenty of delicious food, the brewery produced a batch of its India Pale Ale, but instead of moving it into a fermenter, they gave it away to anyone who brought a clean, 5-gallon container. All the lucky recipients needed to do was to pitch their own yeast. Forty-four home brewers took advantage of this generous offer, including yours truly. I plan to call mine the King of the Road IPA, since it used King Street wort and bounced down the road for three hours as I took it home from Anchorage.

Finally, Aug. 29, King Street held its first-ever gourmet beer dinner, at Sullivan’s Steakhouse in Anchorage. Sullivan’s has only recently installed draft lines, and King Street’s brews have been big sellers there. Patrons got to enjoy a five-course meal, including such delights as bacon-wrapped reindeer sausage with pears and caramelized onions and fillet medallions of steak with a bourbon peppercorn sauce.

Taken all together, this is indicative of what a great job the folks at King Street have been doing. The quality of their beers has generated the growth in demand, which necessitated buying those additional fermenters, more than doubling their production capacity from 60 to 140 barrels. When I spoke to owners Dana Walukiewicz and Shane Kingry, they said that when they opened a year ago, they thought they might need more tanks in a few years. “Instead, after only six months, we found ourselves talking about needing more tank space,” they said. That’s the sort of thing that happens all the time when you brew good craft beer in Alaska.

So what’s next for King Street? Well, the brewery will be putting its new tanks to good use, producing that much more of its beers, particularly its excellent pilsner. Making a traditional lager-style beer, like a pilsner, involves several weeks of cold aging, which ties up tank space — this was another reason for the expansion. They also have purchased a canning machine and will be experimenting with it in the next few months, making sure that when the brewery cans its beers, there will be no loss in quality. Once it has cleared all those hurdles, look for King Street in cans in the new year.

Looking ahead in September, there will be a beer festival in Anchorage on Saturday, Sept. 22. La Bodega, the excellent beer store in the Metro Mall on Benson, will be holding its second annual Bodegafest, from 2 to 8 p.m. at the Chalet in Kincaid Park. The admission price of $25 gets you a commemorative glass and 12 tasting tickets, with more tickets available for purchase. You can pick up tickets at the store, or at http://labodegastore.com/events. This is a great event, so if you happen to be in Anchorage that weekend, I highly recommend you check it out.

Until next month, Cheers!

Bill Howell is a home brewer, teaches a beer appreciation class at Kenai Peninsula College’s Kenai River Campus and was named the 2010 Beerdrinker of the Year by Wynkoop Brewing Company in Denver.

Filed under beer, Drinking on the Last Frontier