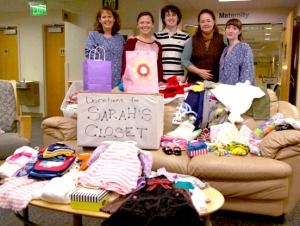 Photo by Jenny Neyman, Redoubt Reporter. Volunteers of Sarah’s Closet display some of the donations of baby clothes they’ve gathered at the maternity department at Central Peninsula Hospital. Each new baby at CPH will be sent home with an outfit, blanket and other gifts, in memory of nurse Sarah Slegers, who died of cancer in July. From left are Julie McElroy, Stephanie Ferguson, Ian Ferguson, Molly Noyes and Karena Jenkins.

Many things about Sarah Slegers were immediately obvious. Her flaming red hair was the first thing people would notice. To her colleagues in the maternity department at Central Peninsula Hospital, the care and dedication she took in her work was abundantly clear. To her patients, it was her gentle, calming manner and generous warmth — even so far as donating baby clothes for newborns to wear home — that created an instantaneous impression. To those who knew about her illness, her courage and grace won’t be forgotten.

And for those who want to make sure she isn’t forgotten, all those traits are being honored in Sarah’s Closet, a program to continue her practice of sending new babies out into the world snuggled in literal warmth and the figurative warmth of coming in contact with such a loving heart.

“After she died I think we felt this injustice of it all — why would she get sick? And it made me sad to see those bags dwindle down. It was almost like if they were gone, she was gone,” said Stephanie Ferguson, a fellow maternity nurse at CPH.

When Slegers and husband, Jan, had their first baby, Jake, they experienced the usual family deluge of clothes, blankets, toys and other gifts. The joy of her second pregnancy, with daughter, Drew, came with the heartbreaking diagnosis of a rare neuroendocrine cancer. People wanting to help expressed it with even more baby gifts, “Way more baby things than she really could use,” Ferguson said.

So Slegers decided to give them to those who could use them. She’d make up gift bags, with an outfit, blanket, book, toy or some other item, to brighten the day of a mother who was caught somewhat unprepared. Maybe they went into labor early, or they didn’t plan on delivering at the hospital. Whatever the circumstance, Slegers wanted no baby to go out into the world as naked as they came into it.

“It was nice. Whenever we had somebody who needed baby clothes we would grab one of those bags and they’d have something to take their baby home in,” Ferguson said.

Photo courtesy of the Slegers family. Sarah Slegers and son, Jake, as an infant. Slegers donated her extra baby clothes to moms at the hospital.

But it became difficult for Slegers to keep up the effort, though she was determined to try.

“I think it just speaks volumes for the person she was, for somebody who was so sick and not doing well and wanting to give back. It’s pretty amazing to be thinking at that time of other people and other needs,” said Molly Noyes, maternity nurse at CPH.

But that was Slegers, her colleagues said. She was always a pleasure to work with, in her six years at the hospital, after graduating nursing school at the University of Alaska Anchorage.

“She was smart and picked up things quickly, she was really a team player,” Ferguson said.

“The patients loved her, the doctors loved her. She was just an amazing nurse to work with,” Noyes said.

Ferguson said she always looked forward to her shifts with Slegers.

They’d leave it on the desk and fill in a blank as time and an answer would come to them.  Sometimes it’d take them an entire shift to compete a puzzle, or at least get to the last few words before being completely stumped.

“We were not real good at crossword puzzles,” Ferguson laughed. “Between the two of us we’d leave it there all night long and sometimes we’d go, ‘Oh!’ and think of one hours into the shift.”

As the disease progressed, work became more difficult, although she insisted on working as much as she was able, and she retained her sunny personality through it all.

“She was the most positive person I think I’ve ever met. After she was diagnosed she still just kept going,” Noyes said. “It got to the point where she could only work half shifts.  Never once would she complain, and you could tell she was in pain but she never, ever complained.”

Slegers died July 10. She was 31. Not having her around the hospital anymore was painful enough, but seeing her stash of baby bags dwindle to disappearance felt like another layer of loss. So Brenda Hartman, who was the assistant nurse manager at the time, suggested replenishing the bags as a way to remember Slegers, Ferguson said.

The Central Peninsula Health Foundation got involved to support the program, and also established a scholarship for aspiring nurses in Slegers’ name. Ferguson’s son, Ian, a senior at Kenai Central High School, made the establishment of Sarah’s Closet his senior project, starting a Facebook page for the organization, spreading the word though social media and helping put together donation boxes to be distributed around town.

And Sarah’s Closet is up and running. Donations of new or gently used (the hospital can wash used items) newborn clothes, receiving blankets, children’s books (for siblings), small toys and baby-care items are needed. Simply deposit items in Sarah’s Closet donations boxes, located in the maternity department waiting room at CPH and at the offices of Dr. Katy Sheridan and Dr. Kristen Iagulli in Soldotna, or mail to the CPH Maternity Department, 250 Hospital Place, Soldotna, AK, 99669.

Monetary donations also are requested, to purchase needed items, and retailers around town have committed to letting the nurses know about sales so Sarah’s Closet can get the most for any donated money. Volunteers will gather donations from the boxes, sort them, make sure they’re clean and acceptable to give out, divvy them into gift bags and send one home with every newborn leaving the hospital. Ferguson said they estimate 450 gift bags a year, based on the average number of births at the hospital.

“It’s just a ‘Welcome to the world,’” Ferguson said. “We’re doing this as a way to remember Sarah.”

For more information, visit Sarah’s Closet page on Facebook. To donate online, visit http://www.givingheals.org and select the cause to which the donation should go — Sarah’s Closet or the nursing scholarship fund.

One response to “Nursing a legacy of love — Sarah’s Closet drive preserves memory of mom, nurse”