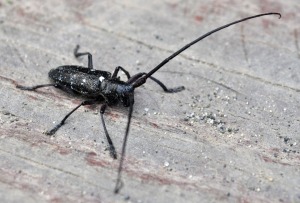 Photo by Joseph Robertia, Redoubt Reporter. The white-spotted bettles sawyer are easily identified by antennae that double the length of their bodies.

The typical response when seeing a raging forest fire is to run the opposite direction.

The white-spotted sawyer didn’t get that memo.

“They’re attracted to the smoke, and they bore into trees as soon as there’s no fire. They’re on it quick,” said Janice Chumley, integrated pest management technician at the Soldotna office of the University of Alaska Fairbanks Cooperative Extension Service.

The species of beetle shows up on the Kenai Peninsula in July and August. Their coloring is black, or black with white speckling, as the name would imply, and they can grow to about three-quarters of an inch in length with scimitar-shaped antennae that nearly double their body size. The antennae aid easy identification by novice entomologists.

“Since they fly, they’ll land on people or people will see them on their car or around the yard. They’re actually fairly common, but we see a lot more of them after a fire because partially damaged trees emit a pheromone that is a calling card for the sawyers,” Chumley said. 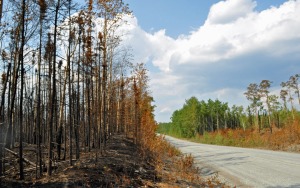 Photo by Joseph Robertia, Redoubt Reporter. The white-spotted sawyer beetle is attracted to trees burned in wildfires. The effects of the Card Street Fire, seen here on Skilak Lake Loop Road, means lunch is on for the insects. Others, like the spruce-bark and ips beetles, are drawn to healthy trees and are more active with warmer weather.

There’s been no shortage of forest fires around the peninsula. The Card Street Fire east of Sterling, and the Juneau Lake and Stetson Creek fires near Cooper Landing, are still smoldering, not far from the edge of last year’s Funny River Horse Trail fire. The fires are a dinner bell for the white-spotted sawyer.

“People assume they are, or are like, the spruce-bark beetle, but they don’t kill trees like they do. Sawyers take advantage of already dead or compromised trees,” Chumley said.

The sawyers typically affect white, black and Lutz spruce, as well as Western hemlock. Naturalist Dominique Collet details the beetles’ behavior in his field guide, “Insects of South-Central Alaska,” stating, “The larvae bore into the trunks. … Adults feed on the bark on the underside of twigs. The female lays eggs in crevices of the bark.”

Chumley said that both the larvae and the adults are eaten by a variety of native species.

“Woodpeckers go after the larvae. It’s definitely one of the things they’re listening for. Any number of other birds will also consume the adults, and even other insects eat them,” she said.

And Chumley said that gardeners shouldn’t fear sawyers, either.

“They’re totally neutral in the garden. People may see them flying around but they’re not harming anything,” she said.

While the sawyers are innocuous, another beetle species infamous for the damage it has done to local forests also is on the rise.

“We are seeing a resurgence of spruce-bark beetles,” Chumley said.

According to the Alaska Division of Forestry, this species of beetle has been responsible for killing 1.2 million acres of mature spruce trees on the Kenai Peninsula alone since the 1970s. The warm temperatures this summer are thought to be causing their resurgence, since spruce-bark beetles emerge from infested trees and fly around looking for new host trees when temperatures are above 60 degrees.

Compared to the white-spotted sawyers, the spruce-bark beetles are only a fraction of the size.

“Spruce-bark beetles are small — only about a quarter of an inch long — oval, brown and they have very short, clubbed antennae,” Chumley said.